Behind the Scenes on Ghost Kitchen Economics 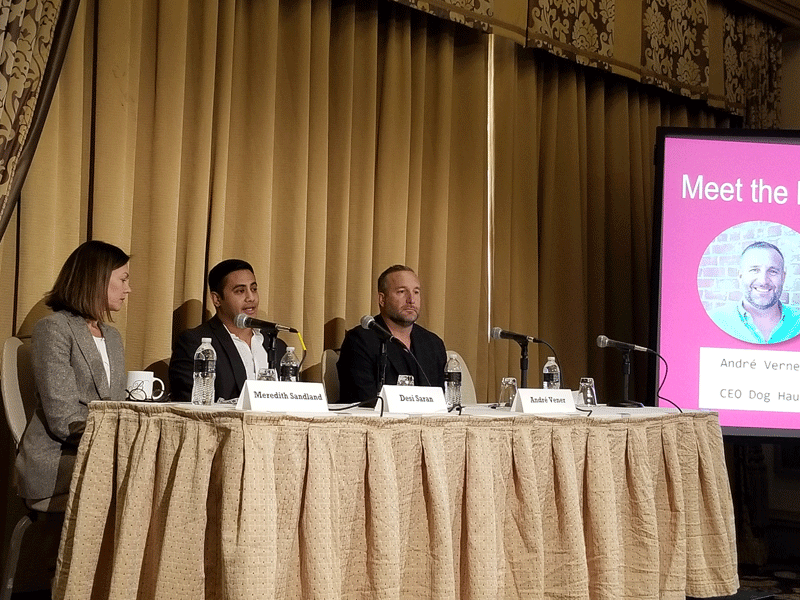 On the third day of the Restaurant Finance & Development Conference, execs from Kitchen United, Sweetberry Bowls and Dog Haus joined Food On Demand’s Nicholas Upton to go behind the scenes on the economics and other details for restaurants now operating within delivery- and takeout-only kitchens.

New Jersey-based Sweetberry Bowls CEO Desi Saran said his two-year-old brand is now up to 19 restaurants across seven states, with delivery adding as much as 15 percent to the brand’s overall topline numbers. Delivery comprises approximately 20 percent of its systemwide sales. The brand has opened its own standalone ghost kitchen, and has also partnered with an outside ghost kitchen operator in Chicago that has 14 concepts under its umbrella.

Dog Haus partner André Vener made one of the largest commitments to future ghost kitchen operations, opening at Kitchen United’s first location in Pasadena, California, and committing to be part of 25 Kitchen United locations in the coming years.

Upton asked panelists, including Kitchen United COO Meredith Sandland, to get into the details of operating delivery- and takeout-only locations compared to traditional brick-and-mortar restaurants.

Vener said that for a small brand with 50 locations, ghost kitchens allow his company to quickly pivot to explore new cities and also new restaurant formats at a much lower cost.

“We’re not putting our toes in the water, we’re diving into the deep end head first,” Vener said. “Everything we’ve done for brick and mortar we now have to change.” He added that opening ghost kitchens in new markets allow the brand to test consumer acceptance, as well as seeding the market for possible future franchisees to enter with some brand awareness compared to going into new places totally cold.

“We’re a franchise company, so part of our job description is to sell franchises, as well,” Vener said. “Now we can help our development officer to find a franchisee who wants that territory … with a proven concept, so we’re using that as a tool to do franchise sales as well.”

Saran echoed that sentiment, noting that starting in a new market with a ghost kitchen allows the company to “reverse engineer” a ramp-up plan with rent and startup costs that are dramatically lower than opening a full-on restaurant with a traditional dining room. “A third method we’re trying out is we are building ghost kitchens within our existing restaurants,” he added. Sweetberry has also launched Sweetberry-branded poke offerings out of existing restaurants without needing additional equipment or real estate.

Kitchen United’s Sandland said the ghost kitchen provider can put up to 10 individual brands within one of its facilities, and that shared expenses and services create efficiencies and lower the barrier of entry for existing brands reducing the amount of time required to reach breakeven profitability.

Vener said that brand’s business model means the lion’s share of the effort is focused on marketing to spur initial order volume, which he added still isn’t an easy task. “It’s new, that’s the hard part, but we’re dealing with sales and marketing, and then operationally, it’s pretty simple.”

Delivery-focused facilities have allowed Dog Haus to use existing ingredients for its hot dog-focused concept to also offer breakfast burritos for delivery, which can add up to a quarter-million dollars in annual sales for a single location, solely by selling “about 75 breakfast burritos a day.”

“If you can add that to everybody’s brand, that’s an amazing number,” Vener added. “If we could sell a quarter-million dollars just off of a breakfast burrito with two guys, I’ll take that all day long.”