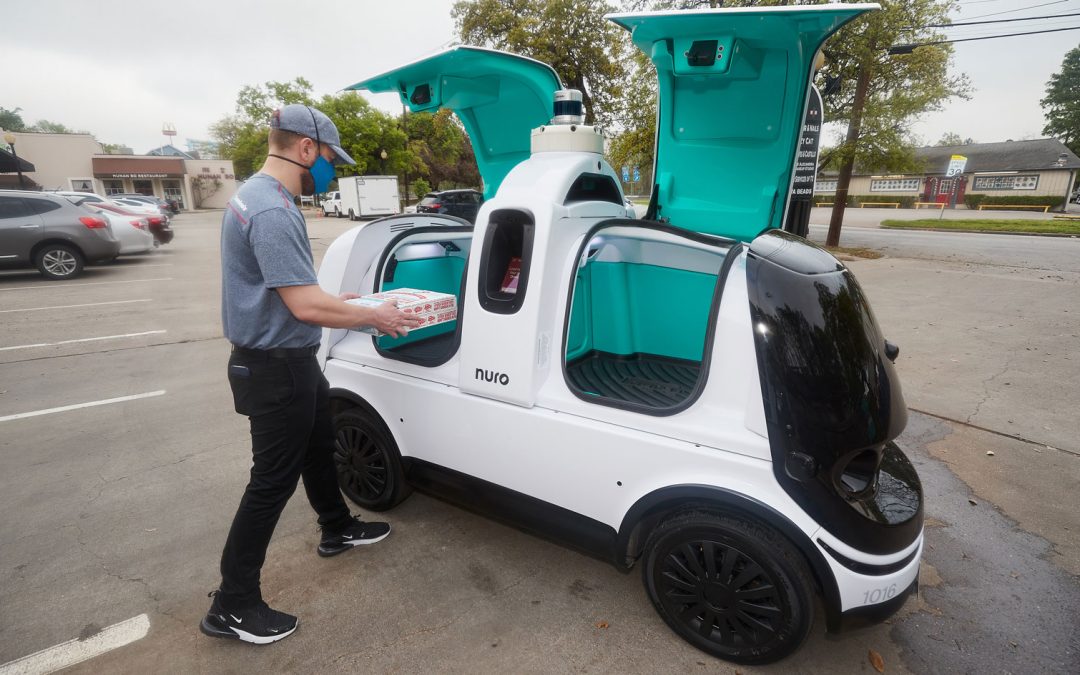 Some lucky customers in Texas can now get a fully automated robot delivery from Domino’s.

In the real-world launch of a partnership we covered last year, the pizza giant and automation partner Nuro are finally doing real-world testing of automated deliveries. The test will be limited to a single location in in the Woodland Heights neighborhood of Houston. Customers ordering and pre-paying for their meals will be asked if they would like their order delivered by Nuro’s R2 Robot.

Domino’s wouldn’t divulge specifics, but a representative said there would be a “limited number of R2s at this store.” That careful language suggests more than one robot is on the job, but also that there isn’t an entire fleet of delivery robots just yet. While small and focused, this latest test builds on other pilots with Nuro partners like Walmart, Kroger, Chipotle and CVS.

Nuro also just announced it received the OK to test its vehicles in California, and it’s just the second company to receive such a regulatory nod. It was also the first vehicle to be approved for a driverless operations allowance from the U.S. Department of Transportation. That means no driver, no occupants and no chase car to keep tabs on the autonomous vehicle.

The adorable little bot will definitely catch some eyes as it goes about its business. The Domino’s delivery vehicle comes fully wrapped and branded. When customers spot the futuristic little car heading their way, they are instructed to move to the curb and enter a PIN to receive their food. That interaction is one of the key details Domino’s and Nuro are exploring during the project.

“There is still so much for our brand to learn about the autonomous delivery space. This program will allow us to better understand how customers respond to the deliveries, how they interact with the robot and how it affects store operations,” said Dennis Maloney, Domino’s senior vice president and chief innovation officer. “The growing demand for great-tasting pizza creates the need for more deliveries, and we look forward to seeing how autonomous delivery can work along with Domino’s existing delivery experts to better support the customers’ needs,”

The company showed images of what the “control station” in the test restaurant looks like, and it looks a lot like a bog-standard desktop. As for the operations, employees simply load the Nuro bot with food and wave goodbye, but the company will likely find some operational areas to streamline the process.

No timeline was announced for the test, but expect more projects like this given Nuro’s many new certifications and other partners eager to unlock more efficient deliveries in a variety of environments.