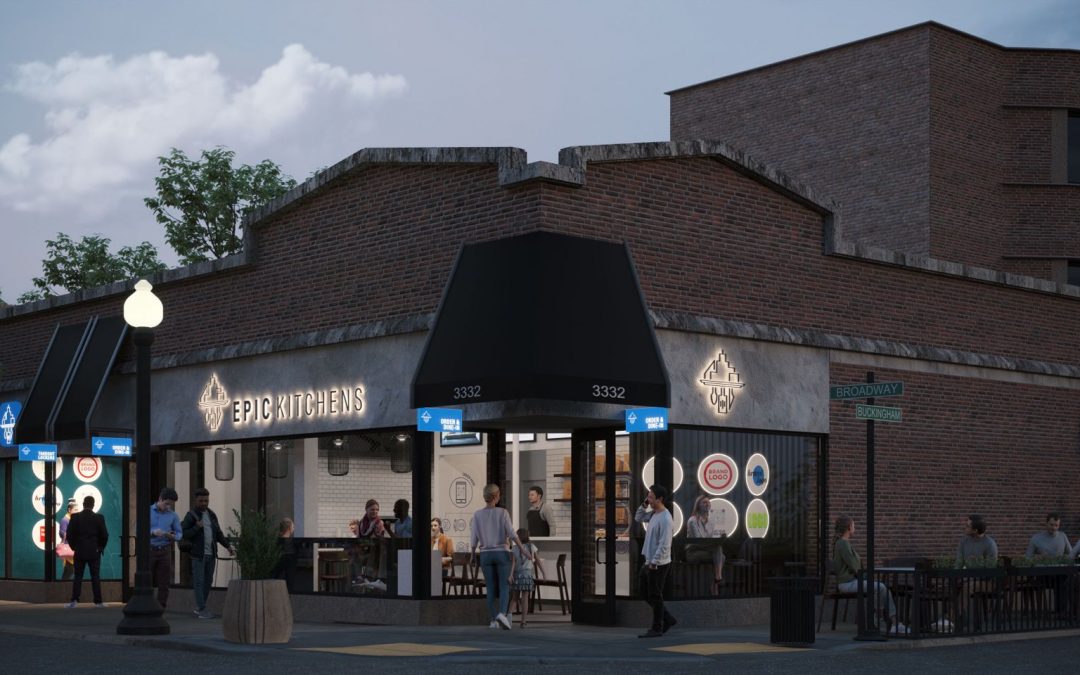 Epic expects the location will earn 30 to 40 percent of its revenue from dine-in customers, with the rest coming from takeout and delivery, said Epic Kitchens CEO Murad Karimi. The Lakeview location features a 700 square foot kitchen and a 20 seat dining room.

Epic Kitchens is an “operator first,” said Karimi, and has no plans to lease kitchen space to other operators. Following the success of the first location, the company aims to expand across Chicago’s urban areas, and begin experimenting with suburban kitchens as well.

Before starting Epic Kitchens, Karimi was CEO of Mosaic Management, an Arby’s and Moe’s Southwest Grill franchise he founded in 2010 and grew to 45 locations. Karimi is still invested in Mosaic, but stepped back from his executive duties to focus on Epic.

“We’ve always been quite curious” about delivery-forward concepts, said Karimi. The impetus to start one came when he and his business partner, Richmond Bernhardt, noticed that delivery was the “primary growth driver” of the restaurant industry, while dine-in transaction growth was languishing.

What followed was a year-long experiment with delivery kitchens. Karimi said the company rented 1,000 square feet of space from CloudKitchens in Chicago’s River West neighborhood and got to work learning how to run a delivery kitchen, how to optimize it and figuring out what type of brand worked best. At one point, he said, Epic was filling orders for 14 different brands out of its CloudKitchens location.

“We had a ton of learnings” from that time, said Karimi. National and regional brands worked best for them, and he said they quickly realized they didn’t want to launch their own brand. They also learned the value of space. Karimi said they’re using several high-tech pieces of kitchen equipment, including Ovention ovens, CVAC ovens and the Vulcan clamshell griddle to maximize every square foot of kitchen space they have.

That preparation paid off. Pre-launch, Karimi said they had trainers from Pokéworks, BurgerFi and 800 Degrees all on-location simultaneously, and that training went off without a hitch. The brands play well together, he said. They all occupy a similar premium fast-casual tier in the market, and there’s little overlap in menu offerings.

Of course, it helps that many of the brands have ghost kitchen experience. BurgerFi and Pokéworks have large ghost kitchen networks, and 800 Degrees recently signed a deal with Reef to open 500 dark stores.

Delivery may be where the growth is, but Epic has no illusions as to where the money is. The “margins on delivery only are quite slim,” said Karimi, held down by fees and commissions that can be as high as 30 percent of an order’s value. Epic needed to learn how to run a delivery kitchen, but a storefront and dining room were always part of the plan.

To help improve delivery margins, Epic Kitchens launched its own ordering app. Customers can combine orders from all four brands using the app, and Karimi said the company plans to offer aggressive incentives, including a loyalty program and a signup bonus, to lure customers onto its ordering platform. Despite that, Karimi said Epic “wasn’t shying away from the third-party delivery services.” He noted that Grubhub, DoorDash and Uber Eats are powerful discovery tools, and that many consumers already have their apps downloaded.

The biggest hurdle in moving from CloudKitchens, which Karimi called a “turnkey” solution, to its own kitchen was the process of building and permitting the new structure. The team has a lot of expertise in opening new restaurant locations, but getting the appropriate permits has taken a long time. Karimi said they’re still waiting on signage permits for the River West location.

While the permits have been a struggle, getting landlords on board hasn’t been, said Karimi. The River West landlord immediately understood Epic’s potential, he said, and the company has a strong pipeline of new locations.