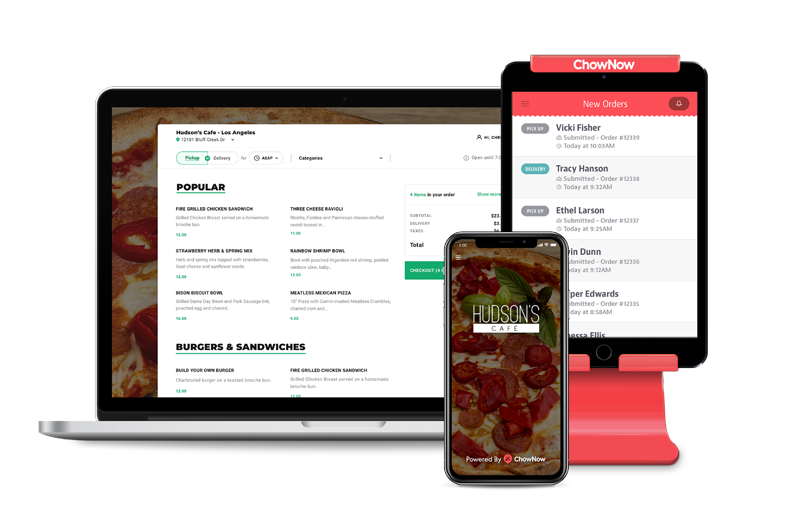 The bigger third-party delivery gets, the more incentives restaurants have to move Grubhub, DoorDash or Postmates customers to in-house channels that don’t cost nearly as much. Filling this gap between self delivery and using national delivery brands that charge upwards of 25-35 percent per order, ChowNow is one of several companies springing up to help restaurants generate and fulfill their own delivery orders, with the mirage-like promise of paying much smaller per-order fees for each meal that leaves the restaurant in a bag or box.

Now eight years old, ChowNow shifted from helping customers understand the potential of online ordering to now helping them develop their own mobile apps, use DoorDash and courier services solely to fulfill orders—rather than for demand generation—and targeting the most frequent takeout and delivery customers to make sure that the revenue they bring in via online channels is profitable for restaurants, rather than a drag on the P&L. Boiled down to a snippet, paying 30 percent for every delivery is frustrating when it’s 5-10 percent of a restaurant’s overall volume. At 30 or 40 percent of total volume, those fees become a four-alarm fire.

“Now it’s convincing them that, hey, this is a better option for you, this gives you control,” CEO Christopher Webb said of conversations with operators struggling to understand a world that’s more complicated than ever. “It means you don’t have to pay these crazy commissions, it means you control your customer base and control your destiny.”

Compared with Olo, which is an interface between large-scale restaurants and countless delivery channels, ChowNow is primarily focused on the smaller, independent restaurants that lack enterprise-scale technology and customer analytics teams of the biggest brands.

ChowNow’s staff of approximately 250 is divided between offices in Los Angeles and Kansas City, and includes a sizable cohort of sales reps who have their time remotely scheduled so they can spend their workdays visiting as many restaurants as possible.

Webb said restaurants should set four key goals to wield more control over the online side of their business, starting with creating an in-house ordering channel, which can be accomplished with a proprietary mobile app or just by adding a widget to a restaurant’s existing website. That enables restaurants to pay national delivery providers or local courier services a much smaller fee strictly for fulfilling deliveries, rather than bringing them new customers.

Secondly, customer education is a major facet, which he said should be centered on explaining that they’ll get the very best deal ordering directly through the restaurant. Rather than displaying signs for national delivery services, which has become common at host stands from coast to coast, Webb recommends direct interaction with the most frequent customers to explain the benefits of migrating to the restaurant’s own online ordering.

“The messaging can be boiled down to something that’s very easy, but I don’t think people do a very good job of it today,” Webb said. “You as a customer will pay higher prices if you order off a marketplace, so if you order off of Grub or DoorDash or Uber Eats, nine out of 10 times you’re paying a higher price for the exact same order.”

Once in-house delivery is up and running, fulfilled by DoorDash or local services, ChowNow then analyzes a restaurant’s transaction history to outline a phalanx of possible marketing plans leveraging the newfound data with a focus on getting the most loyal customers to order even more often. ChowNow also focuses on driving takeout/pickup volume, which Webb referred to as “quasi delivering their own food” and said is an often overlooked tactic for avoiding the costs of outsourced delivery.

From there, Webb’s team looks into the transaction data to help restaurants understand the lifetime value of customers, especially those that have the potential to become high-frequency online customers.

If a customer orders three times in the first month, Webb said, the likelihood of them being a loyal customer grows significantly. “We create custom campaigns for the restaurant where they don’t even have to think about it, but the first time a customer orders, they get a really nice thank-you email from the owner and a week later a follow-up email saying it makes sense for you to order direct.”

ChowNow has more than 12,000 locations using its software, and the company projects $750 million in gross foods sales throughout 2020, while growing its restaurant count closer to 15,000. That equates to 7 million customers, who are being subtly educated on the advantages of ordering directly.

ChowNow bills its restaurant clients on a monthly basis, starting at $99 a month for the most basic offering. Looking ahead, Webb has his eye on catering, which is something he’d eventually like to add to the company’s portfolio.

Between now and then, he and his growing team remain focused on understanding the industry as deeply as possible, and then translating that intelligence into easy-to-digest tapas plates for restaurants seeing more challenges and opportunities than ever.

“It’s been challenging for years, if not decades for independent restaurants, and it’s just getting more challenging,” Webb said. “That’s our job at ChowNow, how do we help these restaurants get online and compete, and not have to think about online ordering or their customer bases.”