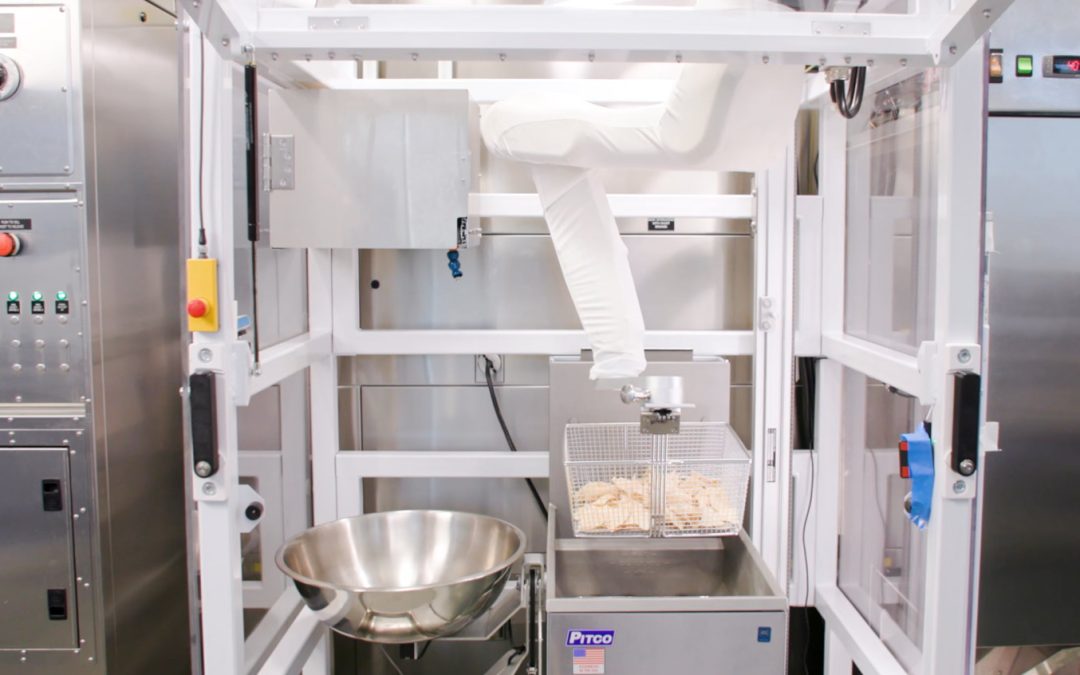 Miso Robotics and Chipotle are testing an automated chip-making robot to see if it can keep up with human counterparts and meet the burrito giant’s exacting standards.

Dubbed “Chippy,” the chip-making robot will look familiar to Flippy fans. It’s based on the same platform that powers Flippy, the burger-flipping and fry-frying robotic arm. Chippy, however, is slimed down from the typical multiple-fryer outlay and was designed to work with a single fryer as Chipotle restaurants typically only have the one chip-making station.

There were some significant tweaks to the platform to meet Chipotle’s specific methods. When Flippy is making fries, for example, there are little changes like a basket shake or timings to work through. Between Flippy restaurants like Caliburger and White Castle, which just announced a major Flippy rollout, making fries is pretty similar.

Making chips is different, and making chips for Chipotle was far from routine as Miso Robotics CEO Mike Bell explained.

“Chipotle has the quality and the artistry in their ethos, it’s deep in their brand,” said Bell. “We approached this a lot different than just squeeze some lime over here, it’s more precise.”

But not overly precise. Neville Panthaky, vice president of culinary at Chipotle, said he doesn’t want a robot making perfectly-coated Doritos style chips but retain some of the “humanity” customers love.

“Everyone loves finding a chip with a little more salt or an extra hint of lime,” said Panthaky. “To ensure we didn’t lose the humanity behind our culinary experience, we trained Chippy extensively to ensure the output mirrored our current product, delivering some subtle variations in flavor that our guests expect.”

Miso and Chipotle first met in the fall of last year to talk about robotics. To Bell, it was an ideal partnership among a never-ending list of inquiries. Chips bubbled up as something that could be automated. But then the Miso team had to figure out how it all worked, how to get just the right amount of artfully non-homogenous lime and salt on the perfectly crisp chips.

“Chippy was just an idea then,” said Bell. “Many of the pieces we already had developed, but the form factor, the elevator system to bring the food up and down and the mixing bowls—all these were just ideas that weren’t invented yet. I have a super talented team and they came through in rapid fashion. It was really fast for the robotics industry and lightning fast for the restaurant industry.”

Now, about six months later, Chippy is cranking out chips in a Chipotle’s Cultivate Center and test kitchen in Irvine, Calif., and it’s slated to get a real-world test later in the year at a Southern California location.

Already, Chippy has fried up a lot of chips—so many chips. Bell said his team is “well fed” with all the testing at the Miso lab. He said that experience has him pretty confident that Chippy is up to the task of helping Chipotle on much larger scale.

According to Chipotle, the company will follow a “stage-gate process to listen, test and learn from crew and guest feedback before deciding on a national implementation strategy.” If Chipotle opts to roll out Chippy at scale, Bell said the robot and enclosure can be installed overnight and quickly automate the chip-making process.

Within that listening and learning process, Bell really wants to hear from Chipotle workers. So far, he said human Flippy coworkers are some of the biggest proponents.

“I was just in Indiana last week where we have Flippy in White Castle. I was talking to people [in the] back of house myself and getting the straight scoop. They’re pretty adamant if I take Flippy away they’ll come find me. They say it’s calmer and faster with Flippy back there,” said Bell. “Without Chippy you have buzzers going off and you can’t go far before a fryer needs attention. But Chippy takes over these frying tasks and allows a Chipotle team member to make multiple bags of chips with the push of a button.”

One especially interesting potentiality is that Chippy might mean even fresher chips for Chipotle. Currently, the company makes chips about once per day. By automating the task, the company could potentially make chips by the hour, reducing waste and delivering even fresher chips to customers. After all, it’s just a matter of pushing a button for staff.

Take a quick look at Chippy in action below: