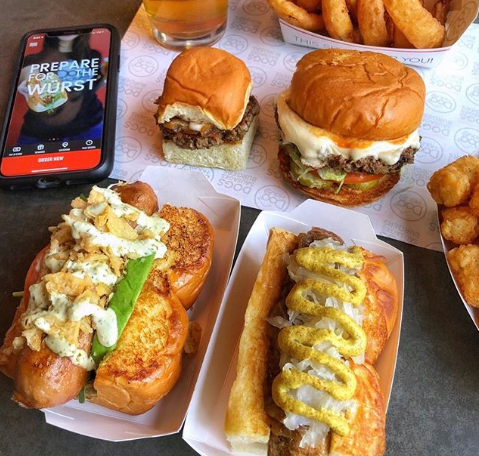 Hot dog franchise Dog Haus is expanding quickly beyond its current stable of 35 locations, and is looking to get into the ghost-kitchen space as delivery becomes an increasingly large share of its business.

Highlighting both the potential sales gains and challenges with third-party delivery, the California-based company’s furthest-afield store in Bethesda, Maryland, is its busiest with 50 percent of sales leaving the restaurant via delivery.

While there’s nothing signed at this point, Dog Haus Partner Hagop Giragossian said he’s a “huge believer” in what virtual kitchen brands Kitchen United and CloudKitchens are both doing across the country. He added that he and his management team are concerned by third-party delivery brands taking “roughly 25 percent” of each order — a factor that’s opened their eyes to delivery-only kitchens.

“Obviously it changes the experience because it’s not a dine-in situation,” he said. “There’s room for certain brands, whether they’re using it as a relief valve from the stores being too busy.”

He said third-party delivery has created what he called an operational nightmare, but also said he hasn’t soured on delivery given its ability to drive huge sales volume. Instead, the company is focused on making the numbers work through a variety of new strategies, which includes reimagining forms of the restaurant concept, be it non-traditional sites or delivery-only establishments. He was careful to note that he’s not certain ghost kitchens will ultimately prove to be a good fit for the brand.

“It’s an interesting opportunity because of the way things change, and they change so fast,” he said. “All of a sudden we’re all looking down this new path, and it’s cool because nobody’s been on it. Everybody in the country is literally at the same time trying to be something different.”

Speculating on markets Dog Haus would like to enter with delivery-only restaurants, Giragossian said New York City, downtown Chicago and San Francisco are especially enticing given the density and delivery volume that’s possible in such cities.

The brand’s top four delivery partners mirror the category’s largest players: DoorDash, Grubhub, UberEats and Postmates. While encouraging the brand’s operators to work with every delivery partner available in their markets, Dog Haus has started working with Ordermark to merge all orders into the restaurant systems through a single tablet, rather than one for each provider.