Ready or Not, Postmates’ Robots Are Ready to Roll 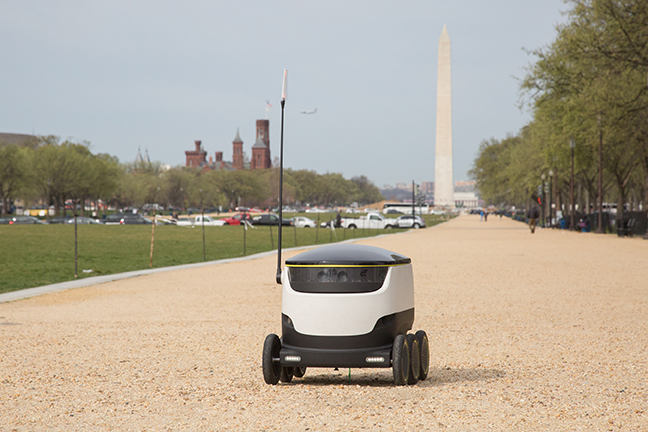 It’s officially time to change the way we talk about robots. With Postmates six weeks into large-scale tests of sidewalk-traversing delivery robots in Washington, D.C., and Redwood City, California, robots are here, they’re ready and they’re making a beeline for your front door with ramen and chopsticks in tow. 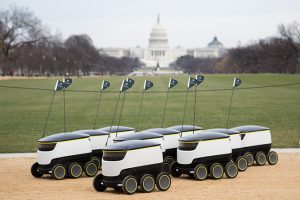 Fear not, the robots are cute. Made by Estonia-based Starship Technologies, they’ve got six wheels, space-age white flanks with a bank of forward-looking cameras disguised as a miniature windshield, smooth, rounded roofs and cute flags gracefully announcing their presence to the oftentimes shocked human beings encountering these robotic sidewalk workers for the first time.

Containing brains in addition to the hot or cold meals under the locked lids, Postmates’ delivery robots are smart enough to stop and analyze complex situations to save their own skin (and your meal) from the dangers of passing motorists, and they are slowly learning the minutiae of their neighborhoods with each delivery, a little smarter with each passing workday.

They have the technology to be fully autonomous, but this initial batch of robots are supervised by humans who record their performance and everyone else’s reaction to these new, soon-to-be-common members of the urban fabric. They’re also connected to a remote command center where humans can watch and, if needed, intervene to help robots handle unexpected situations.

Russell Cook, senior vice president of operations at Postmates, said one of the most interesting things about the test thus far is reactions from merchants, customers and bystanders watching the future roll by.

“One of the biggest questions people have been asking as I’ve been talking about it is, ‘Do they have names?’—it’s funny for so many people to ask about something like that,” he said.

Evoking reactions like “cute” and “adorable” is no accident, as Starship Technologies has played a smart game with the industrial design: rounded corners, cheerful colors, the semblance of a face and angled flags that are all intended to create a friendly countenance to an automated future that’s been both feared and anticipated going back to the Space Age.

As Postmates already has fleets of people on foot, bicyclists, people on scooters and, of course, cars, the robots are intended to supplement the fleet, rather than replace any of its existing couriers.

“They’re exciting from a delivery perspective, because they do offer the chance that, as they scale up, to significantly reduce the cost of shorter distance deliveries,” Cook said. “We’re looking at robots as another class of vehicles that can help with a certain set of deliveries on the platform today, and ones that may not have been economical in the past it may enable that in the future.”

The robots are designed to handle a wide variety of payloads—from insulated meals to typical daily needs like toiletries or pet food—but, for now, they’re confined to prepared meals from Postmates’ partner restaurants. Going forward, Cook expects their duties will expand, as will the size and capabilities of robots allowing them to haul a wider array of meals and consumer goods.

Employees at merchant partners need a surprisingly light amount of training to handle the robots, as payment and notifications (“There’s a robot at the door!”) are all integrated with existing Postmates’ restaurant technology. Once it notifies staff of its arrival, restaurant employees go outside, unlock the compartment, put the meal inside, close it back up, and the robot is off to its destination.

With delivery routes currently restricted at 1- to 2 miles, the robots can work anywhere from 4 to 5 hours on a charge, with some operating for as long as 8 to 10 hours at a clip. Part of the testing includes evaluating whether the robots should return to a central hub to charge, or if their batteries should be swapped out to get the unit back on the sidewalk as soon as possible.

Once on-the-street human handlers are no longer necessary, Cook estimates these devices can reduce delivery fees as much as 80 or 90 percent for certain short-distance deliveries, which would have a major impact on the company and its offerings in dense urban markets.

Cook predicted that at least 10 U.S. cities will have sidewalk robots within the next year and stressed that this is an area of major attention and funding at its headquarters.

“It’s definitely not a pet project or PR stunt,” he said. “I can’t talk for other companies in the space … but for us it’s a very strong focus, very important for us in the future, so we’re investing to make sure we have support for the product and engineering teams as we’re thinking about building the rights things into our platform to help support this into the future.”

Six weeks into its testing, Cook said there haven’t been any significant mishaps with the robots, adding that he’s witnessed some incredible scenes where robots recognized a potentially dangerous situation, but paused to evaluate and react accordingly to escape danger and preserve the payload.

“The limiting factor is not going to be demand from customers … because people are very interested in this and demand in the space is growing so quickly,” he added. “It’s going to be a race, and it really will be interesting for a number of companies to be producing the robots, thinking about the autonomous features and then working with companies like us to help them as quickly as possible gather as much data and figure out the right ways to approach the market.”