Foodsby Brings Lunch to Suburbia on the Cheap 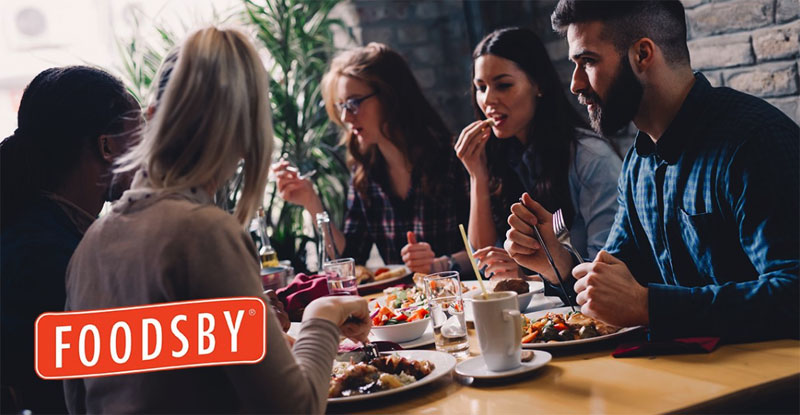 Even though they lack the skyscrapers and classy cachet of big-city downtowns, suburbs are where the bulk of office workers actually reside on a given weekday—and that’s a lot to mouths to feed in the eyes of Foodsby CEO and Founder Ben Cattoor. In the six years since founding the Minneapolis-based lunchtime meal delivery service, Foodsby has expanded to 13 U.S. metros and delivers thousands of meals on any given weekday.

Foodsby is designed to be more efficient than the traditional routine of everyone in an office building ordering individually. Ordering through Foodsby is essentially bulk buying.  Scads of meals are delivered to office buildings in a single drop at a set time each day giving restaurants the ability to plan their labor and production days in advance. Because Foodsby acts as a marketplace, with the restaurants handling their own deliveries, the fee is much less than traditional third-party delivery services. For customers who receive a rotating handful of local and national restaurant choices each day, the typical delivery fee is $1.99 with no tipping.

While it’s ultimately all about the end customer and the restaurant that plans, cooks and schleps the food itself, Foodsby also considers large office buildings as a third main client, with some property managers viewing the service as a perk for tenants. Expanding culinary options in suburbia, the brand says, can go a long way with employees tired of the usual suspects that deliver or are within a quick walk or drive down the street.

“We’re a very specific business model, so we basically just operate during the lunchtime,” Cattoor said. “When you look at our model, we don’t have the same downsides of all the high fees and some of the issues people were to articulate with what I would frame as the courier model where people are actually delivering food.”

An accountant by trade, Cattoor was called “the bottlenecker” at his previous firm where he earned a reputation for finding and solving inefficiencies in a variety of settings. His analytical mind zeroed in on the global inefficiency of everybody going it alone for lunch at his previous office, and he set out to create a better option.

“I was working at this company that had like 1,200 people in one building and there was really only one restaurant that delivered,” he said. “I watched the same delivery driver show up to our building five times in like 45 minutes. Why would they do that? It’s just weird. If I would have known that five other people in this massive company were placing orders, I would have just called them all and said, ‘Hey, do you guys just want to order together?”

Since launching the company in 2012, Cattoor said Foodsby has grown at triple-digit rates as the service expands both through word of mouth recommendations and through its direct marketing to building managers and restaurants that don’t typically deliver. Because Foodsby provides guaranteed order volume, intentionally scheduled on either side of the peak lunchtime rush, restaurant partners are able to add delivery staff—or existing employees—to handle the preparation, packaging and transport of the meals with less impact to operations than other delivery options.

Cattoor pulled out his phone during our late-morning interview and fired up the Foodsby app to show me the handful of choices at his building. He had ordered a salad from Smashburger, located a few miles up the road in suburban Minneapolis.

The brand uses its institutional knowledge and complex algorithms to determine what a given restaurant is able to handle, both in terms of cook-and-hold times, as well as the actual delivery. Restaurant partners are typically limited to a five-minute delivery radius to help ensure food quality upon delivery.

“In this restaurant’s case, their food travels a little [better] so maybe they have three buildings in this area that they’re going to drop food at,” Cattoor said. “We are truly aggregating food within a single delivery, within a single route, within a single geographic area.”

Cattoor sees second- and third-tier cities—particularly those with large suburban office parks—as its best opportunity in the coming years. So far, the investment community agrees— a recent $5.9 million round of Series A funding was completed that included Greycroft Partners, Corazon Capital and Rally Ventures.

D.P. Dough franchisee Brian Van Dyke has been in the restaurant game three years, with a single location on the University of Minnesota campus in Minneapolis. He said he wouldn’t have made it through his first years without the added volume and profits from his Foodsby partnership.

Even though he’s in the top 10 of D.P. Dough franchisees by revenue, profitability has been impacted by high rent and a recent minimum wage hike. The owner of a neighboring barbecue restaurant recommended Foodsby, and he said he immediately started getting 30 to 60 daily orders after starting with the service. Van Dyke said the new orders have drastically improved the lunchtime day-part at a location that does most of its business very late at night.

While the first few years of restaurant ownership have been tough, he added Foodsby can also be a its own headache if a delivery employee misses a shift or gets delayed. If a driver gets lost or delayed, Van Dyke said, it can lead to cascading backups that delay the rest of the day’s off-premise deliveries. Oftentimes he does the deliveries himself.

“I absolutely love them, but it’s kind of the bane of my existence—something happens every day,” Van Dyke said. “It can get tricky with 40 to 50 calzones coming out of the oven, it’s a circus. For a sub shop, it would be super easy to send somebody in an hour early, crank out a bunch of subs and leave them cold, but with these calzones it doesn’t sit well.”

“We do probably $2,000 a week through Uber Eats, that’s our cut after they take their 30% out, and with Grubhub we do a couple of grand a month—I’ve tried Bite Squad and EatStreet and had mixed results,” he said. “Unfortunately, I’m probably going to have to get rid of my delivery staff and go with a straight third party, which really sucks because they’re so unreliable.”

Calling Uber Eats his “cash cow,” he added that not requiring its delivery drivers to carry hot bags has been a significant pain point for his delivery operation.

Cattoor avoided going into the details of specific contracts with national brands, but said the most Foodsby charges its restaurants is 7.5%, which includes all credit card fees. Comparing his service to traditional outside delivery services, he said he doesn’t see how such service work with restaurant business models that tend to operate on narrow profit margins.

“If you’re a service charging, let’s say, 25%, where do you fit?” he asked. “Especially when that 25% comes during your rush, because now you’re really not adding anything on top, you’re actually just adding more, I think, concern.”

Because the company’s target audience is cube- and office-dwelling workers, he tells potential restaurant partners that Foodsby will help them reach customers they wouldn’t normally see without it.

“You have an opportunity to go out and grab customers that, quite frankly, you never would have gotten before, and in our business model you can do it and actually make money.”