Cowen: Dining In is the New Dining Out 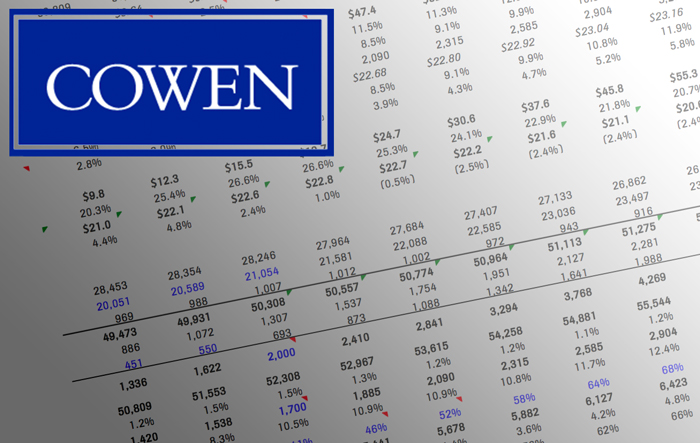 According to a proprietary survey of 2,800 consumers, research company, Cowen, found four “notable tailwinds” for the industry:

2) A long runway for online ordering with only 52 percent of online delivery respondents placing orders online 75 percent of the time;

3) Supply factors (i.e., restaurant availability and growth in third-party delivery services) dominated respondents’ decision-making 3- to-1 over demand-side considerations. This industry dynamic is categorized as supply leading demand, and the expectation is that operators will increasingly add delivery in the future;

Andrew Charles, CFA, the restaurant analyst for Cowen said the survey showed that the timing was right for investors to get into delivery. Which means good times ahead for companies that can master the blossoming industry.

“At a high level, our survey left us confident in delivery representing a bright spot in the backdrop of what we expect will be a slowing restaurant industry sales environment due to oversupply and potentially slow job growth,” said Charles.

He expects delivery will account for 30 percent of the industry sales growth through 2022. He expects delivery growth to widely outpace overall restaurant industry growth. Delivery is expected to rise from $43 billion today to $76 billion in 2022, a 12 percent compound annual growth rate. That’s compared to expected industry growth of 3.5 percent compound annual growth rate. In short, this is no flash in the pan.

He said even the rosy numbers around digital sales growth projected in the report fall far from the digital penetration seen in other digitally disrupted industries.

“When you look at digital penetration, delivery is now 8 percent of the restaurant sales. We think it’s going to go to 12 percent in 2022, that’s a small move compared to other industries that have seen much, much higher digital infringement,” said Charles. 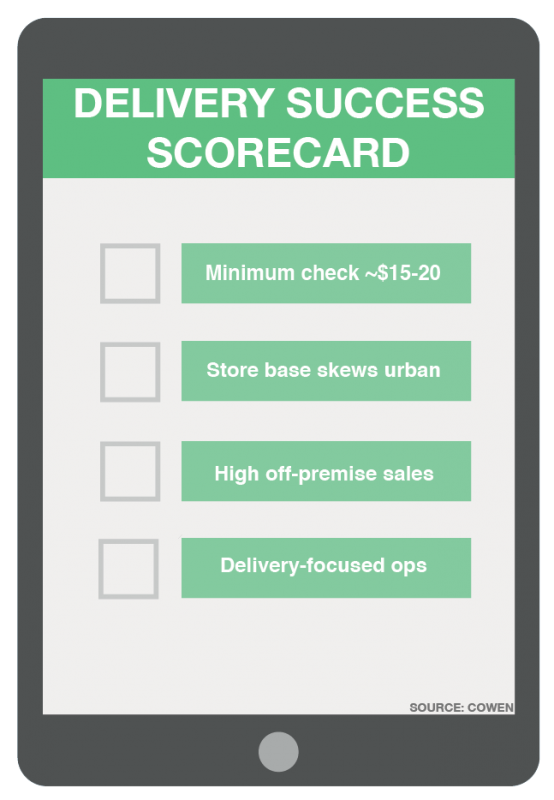 But despite all the hype around delivery, it’s not right for everyone. They created a scorecard for brands thinking about delivery.

“It’s definitely not the blanket solution, there are questions you have to answer: Does your concept skew urban, do you have high off-premise mix, is your ticket high?” said Charles. “When you put that all together with your digital mix, the more you can answer yes, yes, yes, the more successful I think you’ll be with delivery.”

They each check those various boxes and several already have a catering focus that means the infrastructure is largely in place for delivery.

One might ask, “what about cuisine?”, but according to the survey, there was ample forgiveness for delivery, especially around burgers.

“What’s surprising to me is that we put cuisine as an original pillar, but the work we’ve done on this survey shows demand for hamburger delivery, there was also a growing mix within established delivery markets for hamburgers,” said Charles. “That shows me that consumers have leniency around cuisine, so it’s not a limiting factor for delivery. If it’s ice cold you’ve got a problem, but if it’s tepid, it’s understandable.”

QSR may prove to be a weak spot for delivery and a segment that gives researchers pause despite the desire for delivery burgers. First, the check is too low, when adding the delivery fee for smaller orders, it’s essentially the price of another meal, and people just don’t interact with these brands digitally—at least not yet.

“It’s a low ticket so its difficult to optimize those economics an you have a low digital mix as well, Taco Bell leads the pack at 1 percent of sales. And it’s a lower-end customer base,” said Charles. “The data shows, not surprisingly, that delivery is not as popular with lower-income consumers who are most unwilling to make a discretionary purchase on top of a discretionary purchase.”

The Food On Demand team did it’s own admittedly unscientific test of McDonald’s delivery. And even with the company picking up the tab, we’re not exactly clamoring for another Big Mac delivery (see story in this issue).

Which brings us finally to: Who is going to drive all this growth in delivery?

Currently, there is a type of person who orders delivery most: young, affluent, urban and hungry… for time and convenience.

According to the survey, “The rise in consumption year-over-year is greatest in the higher income categories, with those making $100k+ showing a net 23 percent increase in usage year-over-year while those below $50k were more evenly split,” wrote the researchers.

When asked why they ordered more, the No. 1 response was availability of delivery and second was that digital infrastructure made it easier to order. The age range of 18-24 ordered the most food, unsurprisingly, they had 66 deliveries per year and also skewed highest for restaurant visits at 125 per year, according to the survey. The next age bracket (25-34) ordered just a little less, getting food delivered 64 times and going to restaurants 124 times per year. But what was surprising is that the 35-44 category ordered a lot, 55 deliveries went to that demographic, nearly twice what the 45-54 set reported in the survey.

That means, “when the current 35-44 cohort eventually becomes the 45-54 cohort, we think it’s possible the rate of delivery will be higher than current levels,” wrote researchers.

So what is the possible benefit for investors in the space? Cowen has a suite of upgrades and guidance for investors looking to take advantage of the outsized and what looks to be structural growth of delivery among the restaurant industry. The top three are Grubhub, Wingstop and Shake Shack.

At Grubhub (NYSE: GRUB) Cowen forecasts margins will hit 35 percent by 2022, a 7 percent increase and earnings should grow nearly 30 percent annually over the next five years and topline revenue is expected to rise 25 percent by 2022. Cowen upgraded its price target for the company to $54 from $45.

At Wingstop (NASDAQ: WING), everything is largely in place. It already enjoys 75 percent off-premise orders, among the highest in the fast-casual segment. The addition of delivery should contribute 1 percent to 3 percent to the same-store sales in 2018 and 2019 respectively, according to Charles. He raised his price target for the brand to $37, up from $36 or a 22 percent upside to the current stock price.

And at Shake Shack (NYSE: SHAK), Cowen sees a similar 1 percent and 4 percent same-store sales bump in 2018 and 2019 respectively. There’s still a lot of work to be done, but Cowen raised the price target to $39 from $35, a 12 percent upside from current stock prices.

Check out a video from Andrew Charles and Tom Champion, discussing the survey results: