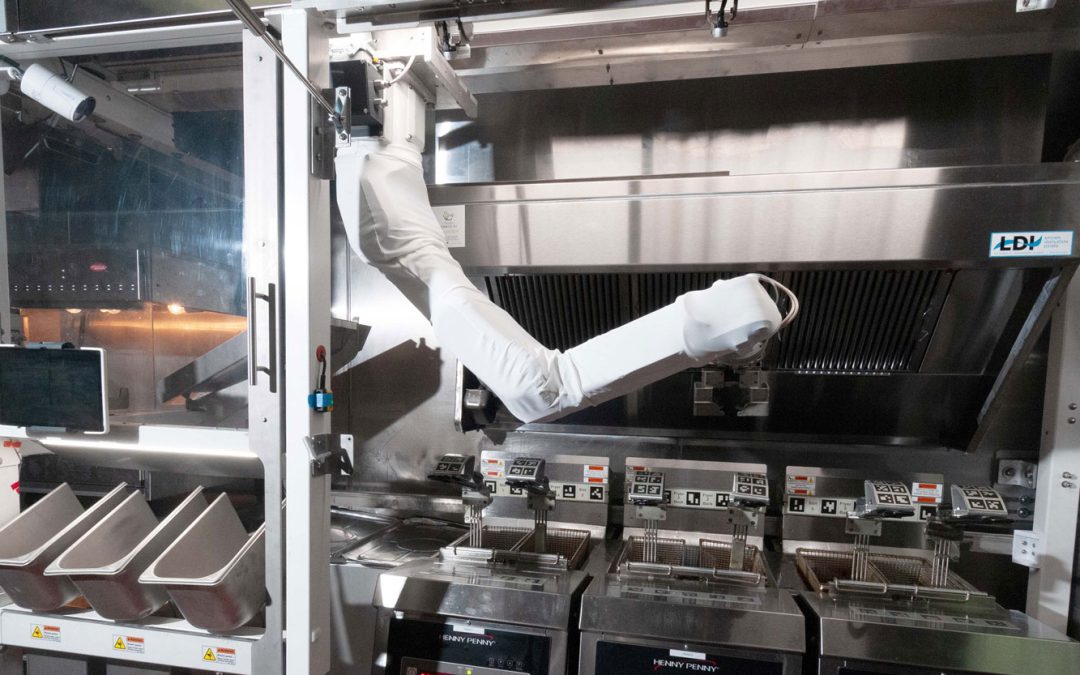 White Castle recently announced it would install robotics in at least 100 locations. The move comes at the brand’s ripe old age of 101, and demonstrates as many years of embracing innovation where it makes sense.

Jamie Richardson, VP of marketing and public relations, has been there for 22 of those years and has been involved with much of that new technology. It’s been a constant drumbeat of updates, moving out of the tiny castles where the brand started as it has brought in an increasing amount of technology.

The latest is robotics, as the company committed to installing Miso Robotics’ Flippy 2 in 100 locations after testing the first iteration and upgrading as Miso evolved the robotic arm platform. As Jetsonian as it still seems, he said moving toward robot arms just makes sense today.

“We look at this like other technological innovations that have come over time. At a certain point, we moved from cash drawers to smart registers and we weren’t yelling back over the restaurant,” said Richardson. “It’s the same with Coke Freestyle machines to give consumers more choice about beverages. All these things are empowering for our customers and team—we view Flippy in the same way.”

The company tested the original version of Flippy a couple years ago, and learned a lot about what made a great robotics platform. Flippy version one didn’t quite make sense, even if it took over a lot of duties at the fryer. Because Flippy 2 mounts to the wall, it meant no dancing around the robotic arm for employees.

“The efficiency is real,” said Richardson. But “we had Flippy taking up a little too much room back of house, all the sudden we just had Flippy turned around and we could do everything in a lot tighter space without someone having to do-si-do around Flippy. Sometimes it’s the littles things you don’t see until you have it in the real world.”

Miso Robotics CEO Mike Bell said it’s the first large brand to make such a commitment to robotics, and he’s excited to keep innovating with the team.

“We could not be more grateful for the confidence White Castle has shown in us as we enter into the next phase of our partnership,” said Bell. “We are thrilled that our Flippy pilot made such a positive impact on their operations that they want to integrate 100 more. We can’t wait to continue on this journey with such an outstanding partner.”

Richardson said that has been a key part of the partnership, that it truly is two entities pushing in the same direction. That’s one of many things that he said White Castle looks for in a vendor.

“It takes some fine tuning to get things moving in the right direction, but we pretty quickly got to that. I’ll attribute that quick progress to the fact that Miso Robotics didn’t just get us to sign a deal and walk away, they rolled up their sleeves and got to work,” said Richardson.

There are a few other important attributes that keep White Castle ahead of the curve of innovation even as a 101-year-old, family-owned company. A wiliness to take a tumble is one such attribute.

“Even if a new idea falls on its face, you’ll still get some good learning. Sometimes the worst ideas lead to the best outcomes. Years ago, we thought we could launch new branded concepts and did so much research,” said Richardson, describing the company foray into the pioneering years of virtual restaurants. “All three failed miserably. But the thing we didn’t count on, it taught us how to do product development significantly. That allowed us to do LTOs in the mid 2000s that bolstered sales and have succeeded for over a decade now.”

It also helps that Wall Street isn’t frothing over quarterly earnings or screaming for perpetual growth. That allows the leadership to look at the long-term health of the company, even when it comes to major investments and those potential failures.

“Like anything, investment in technology helps you achieve more efficiency is something that each firm needs to look at to see if it works or it doesn’t. But being open to trying new things while not without its challenges,” said Richardson, noting that they can embrace the challenge in private. “Our business model is a little different. If a Wall Street analyst doesn’t like what we did this quarter, it doesn’t really matter to us.”

Speaking of the long-term view, however, the tenure of White Castle’s workforce requires a little extra of Richardson when it comes to communicating with the front-line workers. The average tenure for a White Castle general manager is 19 years, and they want to know exactly what’s going on.

He said any company looking to take on big innovative things like robotics needs to have curiosity, but also bring the whole team along. Building a resilient process around the innovation is important too, when Flippy goes down—which Richardson said doesn’t happen often—there needs to be a protocol of what to do.