Building the Midpoint Between Food Trucks and Delivery Pods 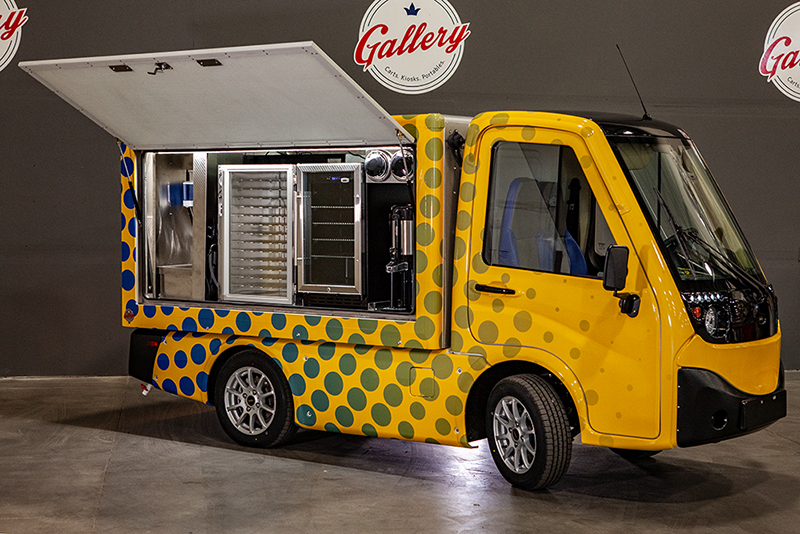 There’s no getting around the inherent inefficiency of a two-ton passenger car delivering a single cheeseburger—it’s hugely wasteful, impractical and, as third-party delivery providers have proven, bad for an industry hoping to eventually turn a profit. As many delivery watchers hail drones as the eventual savior of the industry’s bottom line, smaller, purpose-built electric vehicles might be the holy grail silently whirring away in the shadows.

That’s the goal of Gallery, a Denver-based provider of mobile food and beverage carts that already has a huge presence in stadiums and arenas across the country with non-powered carts and kiosks. With a new partnership with AYRO and Club Car and after years of R&D, the company is rolling out larger, street-level electric vehicles that keep food hot or cold, can cook simple items like hotdogs and pizzas and might eventually be deployed to replace cars as the delivery vehicle of choice in urban areas.

With the pandemic effectively eliminating crowds around the world, Gallery isn’t just looking to the future, but finding countless uses in this strange new world, including helping universities bring food to students now that most collegiate food halls are shuttered. It also envisions applications for restaurants looking to bring food directly to hungry consumers wherever they may be. 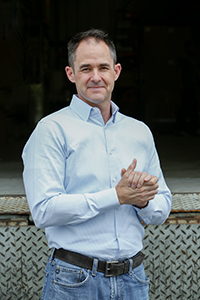 Gallery wants to capitalize on the fundamental appeal of smaller, less expensive electric vehicles. As prices come down, it’s likely that e-vehicles—including bikes, scooters and cargo-specific vehicles—will become a much more common sight in city centers that most of us semi-fondly remember as clogged with traditional cars. While its vehicles tend to fly under the radar, the pandemic might have birthed the perfect environment to reduce the delivery and grocery industry’s dependency on oversized, gas-burning cars.

Started by a brother and sister who built a family deli and soon found themselves in the cart and kiosk business in Colorado, Gallery actually has a 40-year history, mostly under the name of Carts of Colorado. Rebranded four years ago, to Gallery, its president, Dan Gallery, is the son of one of the company’s co-founders.

Originally lured into the family business after a career in the financial services space, Gallery officially joined the company as its business took off, including providing hundreds of mobile carts to new, sadly emptied sports facilities like US Bank Stadium in Minneapolis and the freshly built Allegiant Stadium in Las Vegas. With a headcount of 35 employees, operating out of a 45,000 square-foot facility, the company is predicting significant growth in the coming years as electric vehicles move into the mainstream in niche categories beyond the automobile.

Fast forwarding to a mid-pandemic environment, Gallery said the company has become a revenue generator for restaurant brands, but also institutions like universities that are trying to keep student dining dollars now that many on-campus cafeterias remain closed.

“The vehicle is just that, it’s a mechanism to give students something very unique to interact with, it continues to develop out their brand, it gives the university and foodservice provider some opportunities to market and reach sustainability goals, because it’s 100 percent electric and you’re replacing a gas-powered vehicle, and then generate revenue, which would be lost to an area where a student has to go off campus to get food.”

He added that its new lithium-powered vendor box gives owners the ability to cook hotdogs or pizzas, even though the prime focus is keeping already prepared food hot or cold, whatever it’s sweet spot may be. By running off a dedicated power source, rather than driving the same battery used for propulsion, the new system gives operators seven to nine hours of operating time completely independent of so-called shore power. Gallery has also rolled out a hand sink with a hot water heater and pump, which includes using UV light to kill germs, with obvious applications here in 2020.

Asked if such vehicles could eventually replace traditional, much larger food trucks, Gallery said that’s not exactly the company’s intent, but did highlight the fact that food trucks are physically bulky, and tend to have more stringent health code approval processes and more onerous fees, suggesting that the company isn’t completely writing off the food truck market.

“With the electric vehicles, we’ve hit a really good sweet spot, especially in this pandemic world where the foodservice operator or the franchisee can prepare product in a physical store location and do it safely and package it and load it into the vehicle and drive to locations where they know the consumer demand will be,” he said. “Speed of service on our electric vehicles is significantly quicker, but you’re not really sacrificing foodservice quality either, so we feel the electric vehicles fit in a really strong midpoint where you need to deliver a lot of good product really quickly to students or airport flyers and such.”

Gallery expounded on the subject of franchisees, saying that sandwich brands like Subway and Chick-fil-A are prime targets for the company’s sales force, but that he sees a lot of opportunities, especially in the franchised, enterprise side of the restaurant industry—whether they’re looking for branding at large-scale events or to actually bring food to the people.

Continuing with the campus example, Gallery said some of its vehicles at the University of Denver are being placed at strategic spots on campus where they know students will be getting out of classes, then moving to other areas on campus for later rushes, with the idea that the vehicle is fully independent of any ground-based infrastructure connections like water or power.

Gallery currently has approximately 60 of its electric vehicles deployed and in use out in the field, and the company expects to deploy hundreds of additional units by the end of 2021, stressing that it has no supply-chain issues as a result of the pandemic.

Looking further into the future, Gallery said it has some “really creative ideas on more electric vehicles” coming in the next 12 months, including some “specifically related to the delivery market, like Uber Eats and Postmates,” suggesting that a future where the revolutionary restaurant delivery industry won’t be tied to the lowly combustion-powered automobiles that will soon be phased out in progressive cities and countries around the globe.

“Health departments are going to start to ask those larger delivery entities what are you doing to ensure the food quality from when it leaves the restaurant to when it arrives at the consumer,” he said. “We have some ideas and some concepts that we’re partnering with AYRO on right now to help get in front of that.”