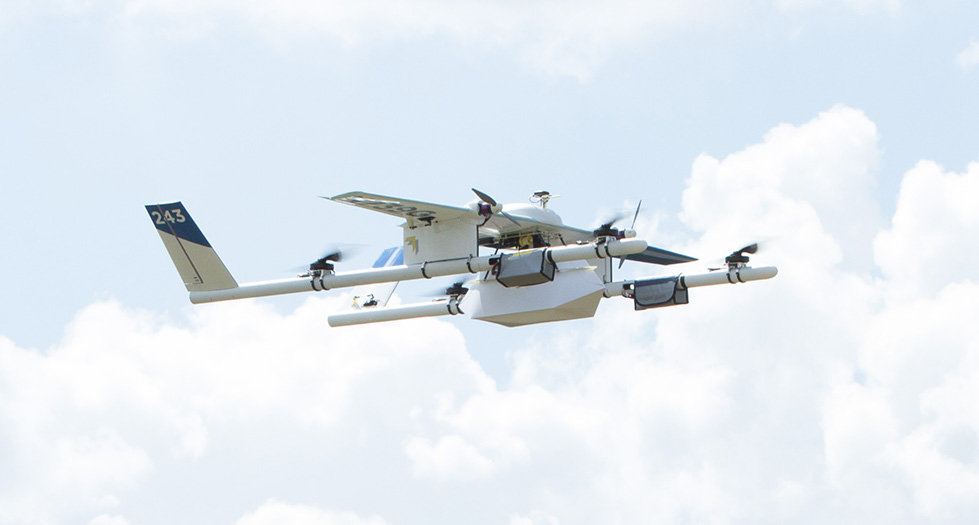 A soft buzzing joins the chirping of birds and the sounds of a cool September breeze. As the buzz grows louder, so does anticipation. Overhead, an autonomous drone stops midair and hovers. A white box emerges from the drone and gently descends to the ground via a cable. The cable is then whisked back up and the drone swoops over the treetops. Lunch is served.

No, it’s not science fiction; it’s the experience of hundreds of students and staff at Virginia Tech where Google and Chipotle partnered to test autonomous delivery drones.

During the test, pilots and engineers from Google’s Project Wing worked with Chipotle to autonomously deliver burritos via a limited flight path under the watchful eye of the FAA.

For futurists, technology nerds and Google fans, the cool factor is off the charts. Just type in an order via kiosk and look to the sky. But for restaurant operators hoping to dispatch delivery drones, the test is a testament to how far the industry has to go until service by drones is feasible.

The first obstacle is simple logistics. Every restaurant operator and customer understands the importance of delivery food traveling well. It’s why few savvy third-party devotees order fries or other menu items that are going to get sad or soggy en route.

Chipotle Communications Director Chris Arnold said no bowls, no chips and no drinks were part of this test. “It’s a decidedly limited menu—limited to burritos—as that is what makes most sense for aerial delivery,” Arnold said.

Keeping cold food cold and hot food hot is a big hurdle for drones; which also need to keep packages balanced for efficient flights. And all that needs to be light enough for the drone to carry. Once the issue is solved for a single meal, it will have to be reworked for group orders and catering, a large portion of third-party delivery.

The second obstacle is wrapped in red tape. Under new rules passed by the FAA, the brave new world of drone delivery has become a tricky prospect. Under Part 107 rules that went into effect at the end of August, there are some new, strict limitations on drone flights. The most damning rules for drone delivery are those against flying at night and the weather visibility requirement of three miles. That means under the current rules, there will be no order spike from inclement weather or nighttime diners (or even early evenings in northern climes).

Even more limiting are dictates that pilots must be within eyesight range of drones, even automated ones. For Project Wing, that limited the test to a fraction of the drones’ range as they tested at a Mid-Atlantic Aviation Partnership and FAA test site on the Virginia Tech Campus.

“Our current system is designed to have a 10km range, but all flights with MAAP will remain within line of sight (a few hundred meters),” said Jacquelyn Miller, communications manager with Google’s sub-brand known for futuristic technology, X. Furthermore, the current FAA rules dictate that there can be no flights flying over people. While that ensures safety, the concept of drone delivery is pretty much a non-starter if that rule stays in place.

All that said, the FAA has been clear that these rules are just the first iteration and the various test sites across the country are designed to help the body collect data.

“The FAA has said that Part 107 is just the first step, and administration has said that they aim to allow innovation, while balancing safety,” said Miller. “To get to that balance and those next steps, they’ve said that they need to work with industry to generate critical safety data, which is a big part of why we are testing with MAAP in Virginia.”

The language from the FAA definitely has a hopeful tone and the level of safety is certainly comforting, but given the rules and the fact travelers still have to strip to their skivvies to board a plane, it’s going to be a long time before drone delivery is even legal.

There are other issues to grapple with, the high cost and technical expertise required for drone delivery, how much of that cost is passed along to customers and what to do when an order goes bad. But, the test did show plenty of positive things as well.

Delivery times were fast, from about two to five minutes from kiosk order to delivery, according to a source involved in the test. There were no damaged or cold burritos and none of the drones crashed. In all, it was a successful if limited test.

And given the hundreds of excited customers willing to jump through hoops to be a part of the test, there is clear interest in the technology, whenever it is ready for prime time.

See a video describing Project Wing below and the drone in flight and more images at the Roanaoke Times.