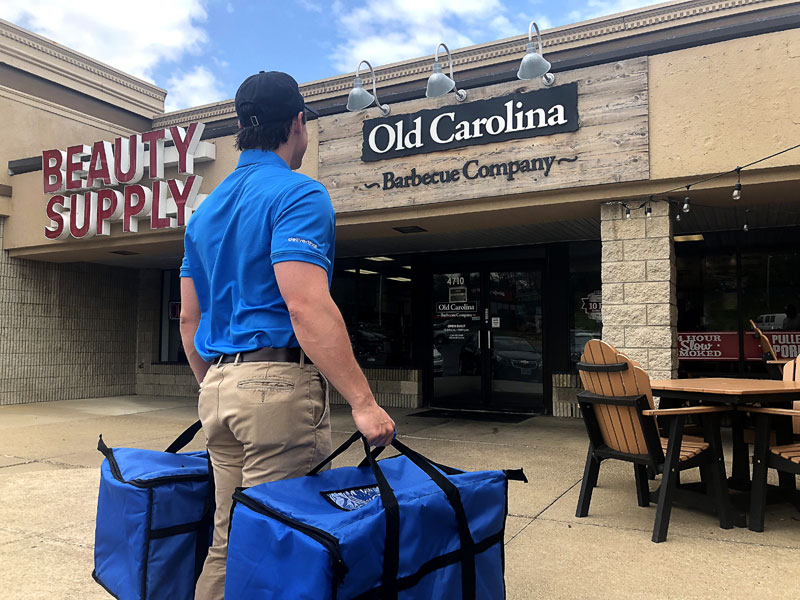 Catering remains hot as an increasing share of the restaurant business heads out onto the streets. Occupying the middle ground between hungry at-home consumers and mega-catering firms like ezCater that primarily service corporate accounts, Ohio-based DeliverThat is a last-mile offering that provides a lower-cost delivery option than many larger, national delivery and catering brands. The company’s unique flat-fee model is gaining traction, with approximately $35 million in sales on the platform during 2019.

Started with a new Twitter account and $60 in cash six years ago, DeliverThat CEO Aaron Hoffman and co-founder John Zinno launched DeliverThat in an Ohio dorm room with an initial offering that delivered students everything from Chipotle to textbooks. After a pivot back in 2016, the company has narrowed its focus to helping restaurants deliver and set up their catering orders with a claimed higher level of polish than local courier services or, in their view, the big meal delivery brands.

As the calendar rolled over to 2020, DeliverThat had approximately 3,000 drivers on the platform with operations in 45 U.S. metro areas. The competitive difference compared to typical courier services, Hoffman stressed, is the company’s new drivers receive extensive training that includes screenings, quizzes and being evaluated during shadow deliveries, which he said is the key to retaining existing catering clients and attracting new business.

“We learned the ins and outs and how professional we had to be, and everything that goes into fulfilling a catering delivery, so we scaled up,” Hoffman said of the company’s shift to catering. “In 2018, we did just under a million in [catering fee] revenue and in 2019 we’re going to do $3 million in revenue, so it’s been exponential—it’s a hockey stick and we’re not looking to stop any time soon.”

DeliverThat charges its restaurant clients flat fees for orders, rather than a percentage of each order. Hoffman said that’s typically a $25 fee that’s passed “through from the customer to the restaurant”—which he added is likely a major factor behind the company’s rapid growth.

While estimates vary, the U.S. catering market is somewhere in the range of $60 billion, with significant growth so far continuing after the debut of larger, national catering brands like ezCater and Foodsby.

Hoffman said DeliverThat is currently profitable, with margins “well above 40 percent” and profits, he added, that are being invested back into the business in the name of growth. The company hasn’t received any significant outside investment, but the CEO said he wouldn’t say no to the right investor that believes in the business model.

Because catering delivery has a low barrier to entry—develop some SOPs, commandeer some drivers and land a few clients—Hoffman said there are plenty of risks to the company’s future growth, including a general economic downturn that would likely impact non-critical business spending.

“If there’s a recession, for example, the first thing you’re going to cut out is catering,” he said.