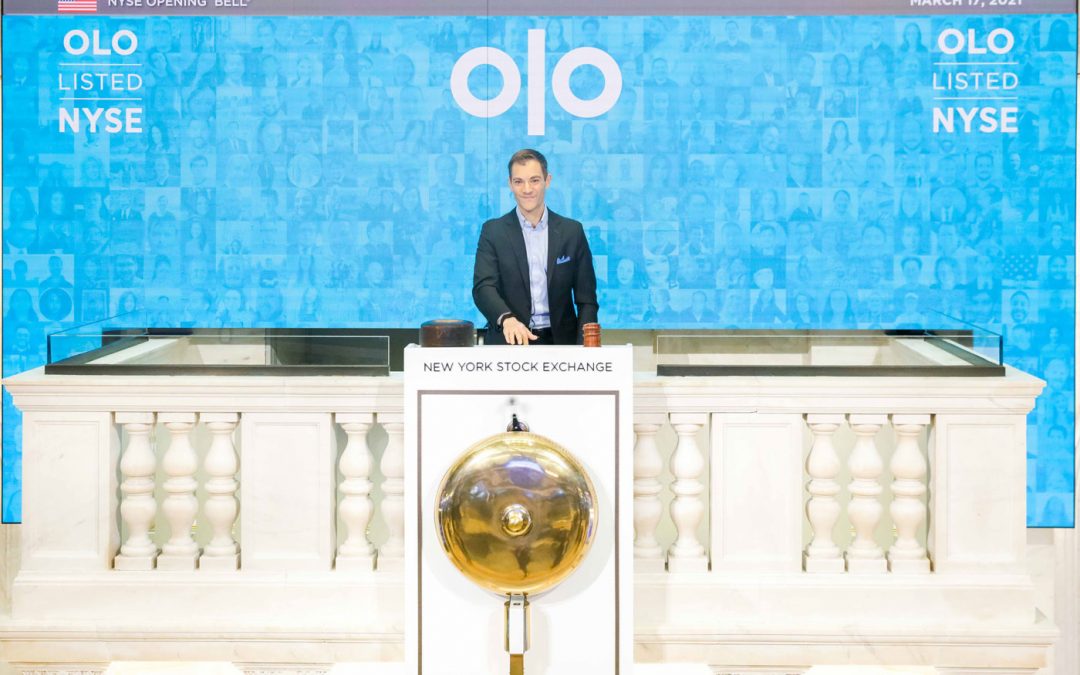 Olo, the multifaceted ordering and logistics platform for enterprise restaurants, reached a new milestone on the floor of the New York Stock Exchange. The company went public with an 18 million-share offering. The stock began trading at $32, a more than 20-percent premium over the originally expected price of $25. That put its market capitalization at $410 million and sent the company’s valuation to a staggering $4.5 billion.

From the floor of the NYSE, founder and CEO Noah Glass told Food On Demand that, while the money is nice, there’s a bigger statement in going public.

“We’re a profitable business, so we don’t need the capital for anything urgent. It really helps as a statement for the restaurants that we work with that we’ll be here for the long term and you can build your operation on top of the Olo platform. That’s literally what I told my board,” said Glass. “I never set out to be a public company, I set out to run a good company. But when I saw the big brands needed to make a platform-level decision, I felt like going public is a way to truly say to our market that were going to be in it for the long term.”

For the 100-plus location brands Olo works with, rolling out a technology piece for ordering, integration with third-party delivery and all the connections therein is no small task. An enterprise brand can see the value of the digital transformation, but it might be reticent to partner with someone who could just get acquired next year, Glass said. The IPO also secures Olo’s independent status.

“People have seen competitors of ours get acquired, and the founders—as well-intended as they are—have to see that there are other motives at play,” said Glass. “With as much of the business going through these channels, you need to know you’re in with a partner who’s in it for the long haul.”

It’s already been a long haul for Olo, as the company has been working on digital commerce for restaurants for 15 years with a few pivots through those years. Glass said one of the most transformative periods was 2009-2010 when Five Guys took a bet on the company to manage its digital commerce.

“Five Guys was really our first major brand to take a chance on Olo, to ask us to play the role of on-demand commerce overseer,” said Glass.

There were a lot of questions that the company had to answer at that time. Would they keep their own branding or white-label the process for Five Guys? How would Olo integrate with the company operations?

“That was no small task, we had never plugged into point of sale before,” said Glass, and back then, there were no APIs or easy ways to integrate. He likened the work to “punching open this hole to drop orders in.”

It was a technical slog, but “we were suddenly able to plug into these legacy point of sale providers used by enterprise,” said Glass. “That whole experience set the tone about how to meet the need for the enterprise.”

While the engineers worked on that problem, he said, the finance folks were working on the business model at the other end of the office. Olo pivoted from a marketplace offering akin to DoorDash or Grubhub and into a software as a service (SaaS) model with flat fees per transaction. For enterprise clients, that model is as important as punching into the points of sale. For a brand like Wingstop, which said it wants to reach 100 percent digital transactions, a marketplace or percentage model would “break the bank,” Glass said.

The last year validated that philosophy even more for both clients and the company as consumers embraced on-demand commerce from restaurants more than ever.

“That’s our ambition to touch all these transactions and add value and drive revenue. When we look at the $40 billion over the year, we processed about 500 million transactions just doing what we do in the natural course of what we do and consumers wanting on-demand commerce,” said Glass.

Olo reported a profit of $3.2 million on a revenue of $98.4 million prior to the IPO, a surge from $45 million in 2019. The timing for enterprise brands (especially QSR) and Olo was especially fortuitous and pushed the proverbial IPO window open further, but like many trends, it was an acceleration not an aberration.

Glass said it’s a “boring answer” but the next phase is right where he is. He said the enterprise market has a further $7 billion opportunity today and the next set of opportunities push the company’s playing field to $15 billion and the “emerging enterprise” brands out there push the opportunity to $15 to $20 billion. Glass said another step will be expanding internationally with Olo’s current clients. He said the company may look at other verticals like retail, but not quite yet.

While the IPO was a great validator for the company, Glass said it’s also a validation for the restaurant technology space in general. The niche segment hasn’t seen an IPO since point-of-sale developer Radiant went public in 1998, some 23 years ago.

He likened it to a wave that raises all boats, especially those in the Olo flotilla.

“In addition to being a great day for our team, it’s also a great day for all our partners,” he added, calling out the more than 100 partners. “It’s point-of-sale providers, and kiosks and in-car ordering then all the restaurant delivery marketplaces. I feel like this is a good thing for all of them. In a way, restaurants are depending on the Olo platform, but so is the ecosystem. If we can drive more transactions through the enterprise industry, we have the ability to touch all those.”