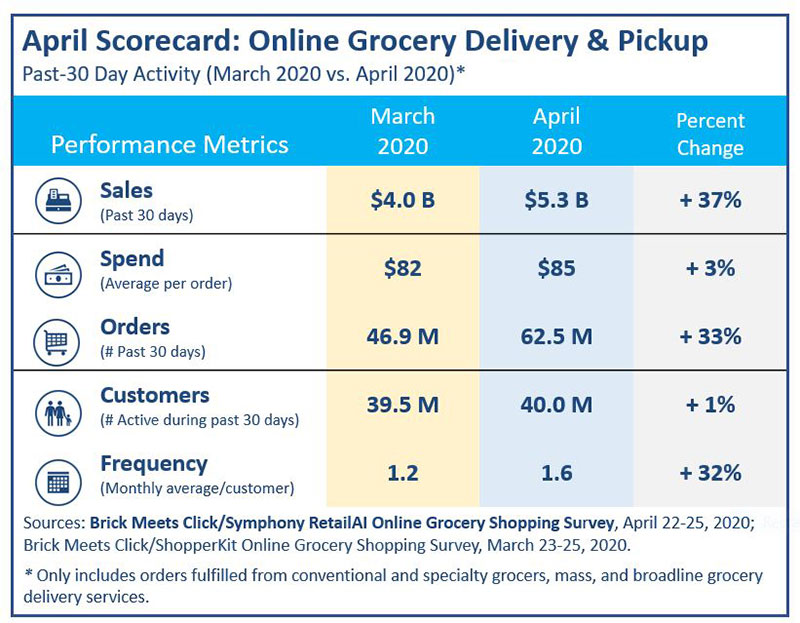 Online grocery sales in the U.S. grew by 37 percent in April, to a total of $5.3 billion, according to research from Brick Meets Click and Symphony Retail AI. The headline figure is a 33 percent increase in the total number of online grocery orders placed in the past 30 days, which increased to 62.5 million over 46.9 million during March, bolstered by a modest increase in basket size, as well.

Diving into the motivating factors behind the surge, the report also asked online grocery consumers about their concerns related to their health and economic well-being that are changing their ordering habits.

The survey found 47 percent of households surveyed expressed a “high level” of concern related to contracting COVID-19, while 39 percent indicated that their average monthly household income since the crisis has dropped by 25 percent or more since the first two months of 2020.

In total, 40 million customers purchased groceries online in April, which is above the previous high-water mark of 39.5 million during March. What’s more, monthly average orders per consumer increased to 1.6 from 1.2 purchases per month.

A separate report from C+R Research backs those numbers up, with its findings showing a big jump in online grocery shopping, but at much less frequency than the pre-COVID-19 era. C+R’s recent survey shows that 60 percent of consumers are now fearful to shop at a grocery store in person.

With ongoing concerns about the safety of grocery-store employees, as news reports indicate trouble in corners of the grocery supply chain, these numbers will be interesting to follow as the crisis progresses and delivery grabs a bigger chunk of the grocery market.