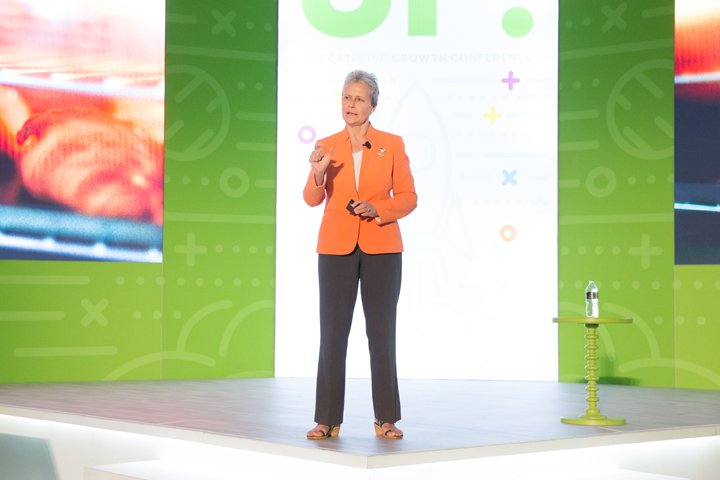 Pictured above: Stefania Mallett, co-founder and CEO of ezCater, addresses the crowd during her keynote address at the inaugural CaterUp conference.

With approximately 300 attendees representing 185 foodservice brands, ezCater hosted its first CaterUp conference in New Orleans with two days of education, Louisiana culture and an oft-repeated refrain that catering is different than other off-premises restaurant channels.

“The breadth of catering is substantial, almost like a completely adjacent business to your operations,” Riedel said in his opening remarks. “If catering is different, you need a strategy and a plan to approach it differently.”

Its organizers also released a study called The Catering Opportunity packed with data to help operators understand this $60+ billion market that’s outpacing the industry—that’s a lot of sandwich platters, which remains the most frequently ordered item for better or worse.

The data showed many restaurant brands have not made any sizable investments in catering, ezCater’s staff made a case for spending money to unlock greater sales through a channel that’s become an additive for many restaurant brands, and occasionally an alternative to third-party delivery that generally costs restaurant operators a higher percentage of each order.

Also included in the numbers was a breakdown of the top-ordered cuisines, which is led by sandwiches at 31 percent. Mexican, Italian, American and Mediterranean rounded out the top five at 12, 9, 7 and 7 percent, respectively.

Diving into the evolution of ordering trends as more employers and big-spending sales reps fuel the category, Meiselman added that its data showed strong growth in the breakfast and afternoon-snacking day parts. Lunch remains more than 80 percent of the catering market. Its in-house numbers shows an average check size of $283, feeding an average of 20.9 people and $13.10 spent per person.

Closing out the first-day presentations, ezCater founders Stefania Mallett and Briscoe Rodgers shared their experiences from 11 years in business together, including starting the company in Mallett’s kitchen and funding its early days on credit cards whose rewards are still paying dividends in airline miles.

“There were a lot of humorous moments in the early days,” Mallet said, recalling a customer who told her “the woman I talked to the other day, she was awful” back when it was only Mallett working the phones. “I try to be honest at all times, so I said ‘I can’t explain that. I assume it was a training problem.’

“The restaurant that did our first order is still getting orders from us today, so we’ve gone a long way,” she added. “I could not be more proud of this crowd, and also that it was worth your dollars and time to come here.”

Results from ezCater’s comprehensive catering market survey can be downloaded at CateringData.com.