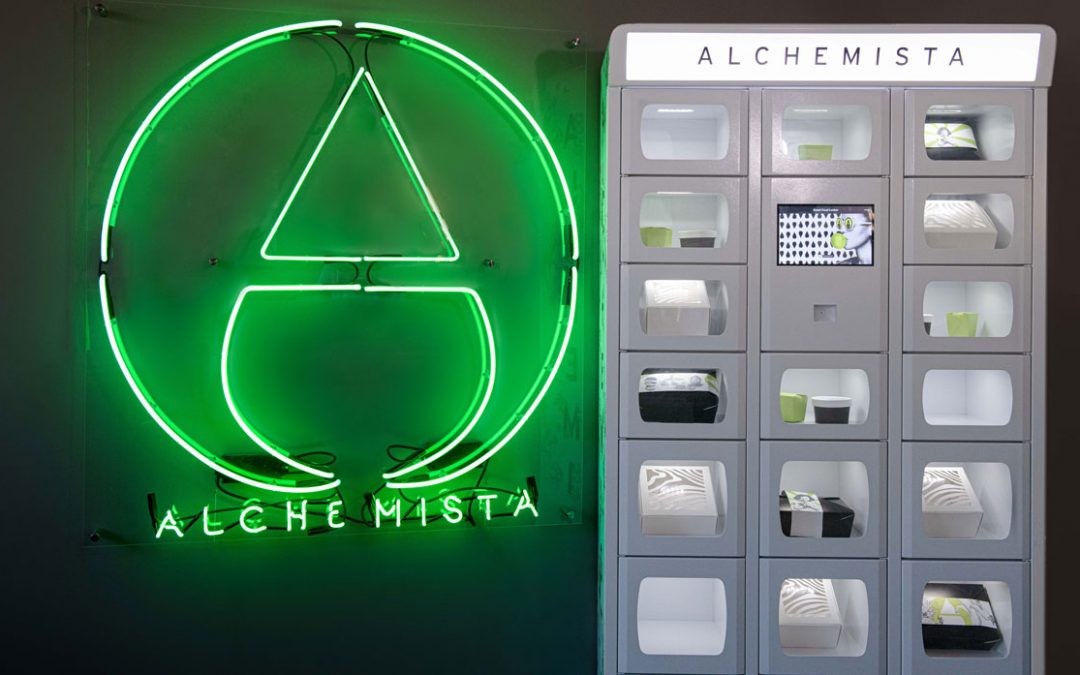 Back in 2019, things were going really well at Boston-based corporate catering provider Alchemista. Founder and CEO Christine Marcus was partnering with restaurants to bring great food to catering clients and had just invested in a robust culinary team to handle massive catering events. Then COVID happened.

“We added our culinary in-house team, so we didn’t just work with restaurants because we have some very large customers like Moderna, where we feed 600 people five days a week—very few restaurants can do that. That was the impetus to have our own team, plus taking control of the culinary development whether it’s vegan or gluten-free,” said Marcus. “We expanded to New York City, then D.C. … and then COVID came just as all this was taking off. In the middle of March 2020, everything came to a screeching halt. We went from having all these of customers to (just having) Moderna.”

Having one of the key vaccine developers as a client was certainly nice, but nearly every other client sent its workers home. Even those that didn’t weren’t eager to share air over a communal dish of pasta or salad.

That put Alchemista’s entire business model in question. Marcus had come up with the original idea for the business while she was still an MBA student at MIT in 2011. The school did a lot of catering, fueling students through their arduous scholastic efforts. The food was not great, Marcus said. “We were all gaining weight on mediocre food.”

She got to work on how to create a delivery marketplace for restaurants and firms to come together over big dishes of good food. She solved for a lot of the issues, preparing independent restaurants to take on big orders for 100 or more people, providing firms with the reliability and convenience of a big provider.

When everything imploded in early 2020, few were hit as hard as Alchemista. But it just so happened she already had a solution collecting dust in the headquarters. It was an automated vending machine with the unique quality of high heat and refrigeration down to the cubby level. From just one machine, a customer could get a hot, restaurant-quality meal and a cold beverage. She had bought a few of the machines from a hardware startup to beta test. Before COVID, however, nobody was as excited as Marcus.

“They said, ‘Oh cool,’ but it was clear that I was the only one excited about it. They sat in our office for a whole year. But I was still convinced they were awesome,” said Marcus.

For her catering clients as well as new locker clients, those lockers started looking pretty good. For Marcus, rolling out the locker—which she dubbed a Locket—became mission No. 1.

“We asked ourselves, how can we shift this in 24 hours? We went and got packaging, and switched to individual meals. That solved the issue, and the need became clear that people want their food hot. In a buffet you can use a Sterno, but when it’s boxed you can’t do that. The lockers solve that problem. I pitched it again to Moderna, they were like, ‘Bring it in,'” she said.

Marcus acquired the locker startup, hired the team and accelerated development. The team integrated contactless payment via app and QR codes, as well as UV lights to zap anything from the surface of the Locket offerings.

The first couple of corporate clients got some momentum going, as did the old adage, “be where your customers are.” Marcus saw it as an interesting real estate play. With scores of workers at home, the home cooking bug was wearing off and everyone was getting sick of sourdough bread. For residential buildings, there was a new amenity arms race accelerated by everyone becoming homebodies overnight.
“Especially in luxury residential, there’s a race to provide the next hot item, no pun intended. There’s an amenity race as people have moved out of the city and now, they’re starting to move back,” said Marcus. “These buildings are all very nice, fancy buildings, they all have the same baseline amenities. It’s a working space a nice gym, those are just table stakes. Now they’re seeing our lockers and this amenity as a differentiator for their buildings. The demand is beyond anything we’d hoped for.”

The restaurants—some James Beard winners—she worked with before now supply the Lockets, as does the in-house culinary team. Each resident gets the menu via the building communication infrastructure (a nice captive market to be sure). They’re alerted when the meals show up and can simply saunter down to the lobby to pick it up.

It’s a radical improvement, she said, for accessibility. There’s no wait, no extra fees and no watching a delivery driver go the wrong direction in an app.

“Obviously food delivery is a game changer, but this is the next phase from my perspective. You don’t have to wait an hour, you don’t have to order on an app or worry your meal will get cold,” said Marcus. “It’s changing the paradigm of what food accessibility means.”
The 10 buildings she supplies so far and the corporate Lockets receive deliveries of meals, beverages and trendy packaged goods once or twice a day from Alchemista’s temperature-controlled vehicles.

So far, the reception has been strong and the results are transforming Alchemista’s business while bringing along some struggling restaurants, as well.

“Being able to leverage our access to all of these buildings and all these people, that we can reach every single day; to use that as a platform to catapult all these other small businesses we partner with, as a founder, I know how hard it is and to use our platform help others get access is very exciting,” said Marcus.

The company currently has a pipeline of about 40 more luxury buildings. After that, Alchemista will begin looking at the university space, too. Marcus said the company is still focused on corporate catering too, such clients can choose to offer meals out of the lockers as well.