Have you ever wondered why more businesses can’t respond to customers with text messages, rather than playing the game of getting stuck on hold or being dumped into an overloaded voicemail box? A company called Numa has rolled out a system that lets retailers and restaurants text customers back automatically using artificial intelligence, and it’s positioning the service as an ideal situation for businesses currently struggling under a barrage of landline calls.

Looking to Asian countries where it’s commonplace for businesses to text their customers, Numa sees the pandemic as the perfect moment to go in a new direction, with claims of labor savings, happier customers and automated answers to frequent questions like store hours and product availability.

“Our view is that we’re going to be looking back five years from now and say, remember the days when we used to pick up the phone to call a business?” said Numa founder and CEO Tasso Roumeliotis. “So we said let’s build a business that is going to help mainstreet businesses, small businesses, restaurants and retailers and chains and franchises, and let’s take their communications with customers and make it textable.”

Calling old-school calls to businesses the “lowest common denominator” of customer interaction, Roumeliotis said 70 percent of calls go unanswered, especially during peak times when the person charged with handling phone calls is assisting customers or checking them out.

He added that with so many businesses now operating strictly through curbside pickup and delivery, customers have more questions than ever. With many companies fielding increased number of calls, Numa says its automated texting service that gradually learns about the business as its products can be a more effective means of communication, and one that’s much less frustrating for customers looking for a quick answer.

Oakland, California-based Numa started operations in 2017 and is the second startup from the company’s founder, who previously founded Location Labs, which provided location-based security and tracking tools. The company was later acquired by AVG Technologies in a deal valued at “up to $220 million,” according to the Silicon Valley Business Journal.

For his latest venture, Roumeliotis said Numa can be especially helpful for fast-casual restaurants that face predictable periods of peak business, where answering the phone is more burdensome.

Acknowledging that it’s important for customers to feel “some involvement of a human,” he said using artificial intelligence to answers frequently asked questions means customers who reached a busy signal or generic voicemail message can immediately be offered assistance, to capture or retain their business rather than moving on to the next store that pops up in Google.

For restaurants now offering curbside service, Numa allows customers to save their vehicle profile and text their orders for a seamless transaction for employees to bring parcels or meals out to the parking lot. The service integrates with point-of-sale systems, which allow orders to be sent directly to back-of-the-house printers to minimize human error.

Roumeliotis said Numa has raised $12 million in investment financing over recent years, and the company recently partnered with Sprint and American Express, which are rolling the service out to business clients as a value add. 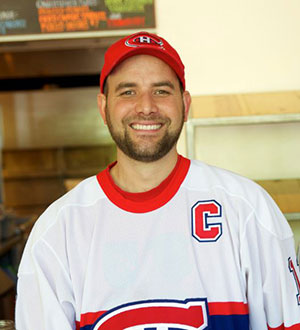 Lex Gopnik-Lewinski of Augie’s Montreal Deli in Berkeley, is one of Numa’s first restaurant clients and has been testing the service as a pilot project.

Having a close friend who lives in Turin, Italy, Gopnik-Lewinski had a heads-up on preparing for the worst of the pandemic before many of his fellow Bay Area business owners did. He saw Numa as a way to hedge his bets, and also reduce the number of staffers needed to keep the phones answered on a daily basis.

Before the pandemic, approximately 60 percent of Augie’s business was dine-in customers, it’s now flipped in the current environment. At present, he estimates that about 90 percent of the deli’s sales are coming through the Numa platform, which he said is why it’s so prominently listed on the brand’s website.

“We were using it somewhat before the pandemic, but then after this happened and curbside became the big thing, the majority of our sales were going through that,” he added. “As of now, we do most of our business through text messaging because it’s simple, it makes people feel comfortable, and as opposed to the delivery apps which we were using and still use a little bit, the Numa service doesn’t take a percentage of each meal.”

Gopnik-Lewinski said he’s even seen an 80-year-old grandmother using the system, which she said was “the easiest text messaging thing I’ve ever dealt with.”

For his own P&L, the fixed monthly pricing made it easier to swallow, compared with third-party delivery services, and other service providers, that charge based on volume. Since he’s now paying less to launder towels each month, adding in the monthly cost for Numa doesn’t further complicate his company’s books or become an untenable expense at higher volumes.

Gopnik-Lewinski added that he still takes calls when he can, which he said is still important even with an automated solution at the ready.

“We give them a little bit of the sexy Lexy voice when we can,” he said, “but if we can’t, it’s not a big deal either, because we know we’re not going to lose out on business.”