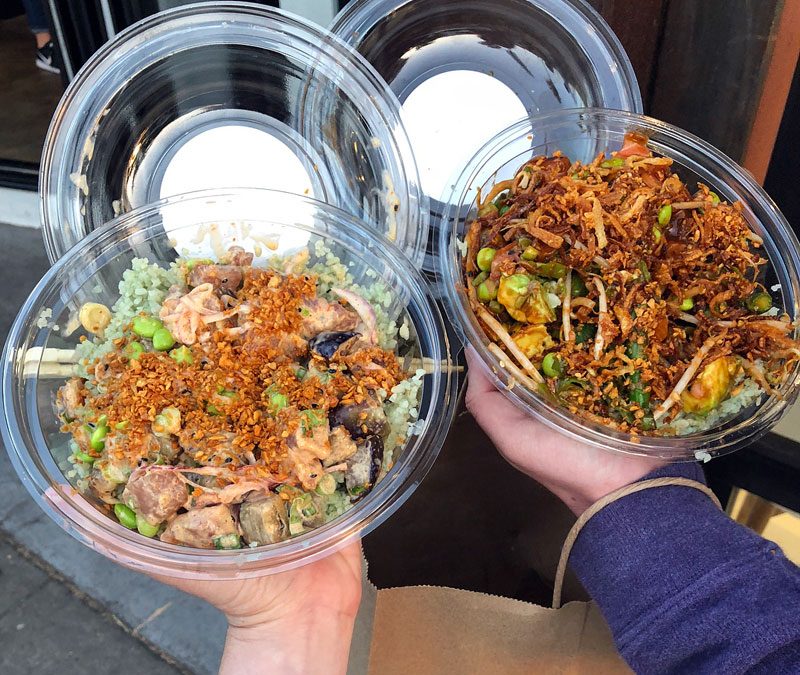 Seth Cohen feels as though his poké restaurant, Sweetfin, is “kinda like the guinea pig” in the world of fast-casual restaurants working with third-party delivery services. It’s a role that’s brought some headaches—Sweetfin’s small footprint means waiting delivery drivers create “a bit of a cluster”— but also insight into how operators can make delivery work to their advantage.

It’s an insight Cohen shared during a Food On Demand webinar last month, when the discussion ranged from how third-party delivery services are impacting consumers’ dining behavior to making predictions on what’s coming in the next five years. (Hint: delivery is here to stay.)

The co-founder of Santa Monica, California-based Sweetfin, Cohen said some of his 10 locations see as much as 50 percent of sales coming through delivery and takeout channels. Postmates and UberEats are the restaurant’s third-party delivery partners, and using their services has meant making some operational adaptations, such as assigning a team member to monitor the ordering apps. It’s also meant a focus on staff training.

“A lot of it is also working with our front-of-the-house team to make sure they’re trained to know that, number one, our guests eating in are our No. 1 priority,” said Cohen. “But also that they know how to handle these drivers.”

In Sweetfin’s heavier delivery locations the drivers “are coming into our store pretty frequently,” continued Cohen. “So believe it or not, it’s also building a relationship where the delivery driver understands the protocol of how each location works.”

Some Sweetfin locations also have separate lines for pick-up and dine-in orders, and the restaurant started working with Checkmate, Vishal Agarwal’s company that’s focused on integration of third-party delivery into point-of-sale systems.

Because an employee would have to re-enter Postmates or UberEats orders into the restaurant’s own POS, Sweetfin had to deal with order accuracy and efficiency issues. Checkmate aims to be a solution and help cut down on not only the 3 to 4 percent order error rate Agarwal said restaurants experience, but also to “remove the bottleneck from the order going to the third-party tablets to the kitchen printer.”

Kitchen United, meanwhile, is focused on the virtual restaurant model, wherein delivery and takeout orders are the only focus. The company’s first location is open in Pasadena, where 15 restaurant concepts operate under one roof.

“It’s built entirely for off-premise customers and built entirely for the growth that we expect to see in the industry in the next few years,” said Atul Sood, a former McDonald’s executive who now is chief business officer of Kitchen United.

In addition to providing restaurant concepts a dedicated space to focus on off-premise business, Sood said Kitchen United aims to give its restaurant clients a marketing boost.

“We’ve found it imperative to invest a lot in hyper-local marketing. We actually help out our restaurant partners on this front, we take out billboards, we invest in hyper-local digital ads through Facebook and Google,” said Sood. “And we’ve even found that old fashioned paper fliers work to get people ordering online.”

Marketing is absolutely key to the success of delivery and online ordering, agreed Cohen, and he advised operators to focus on driving orders to their own restaurant website versus highlighting partnerships with third-party services, who often don’t share customer data.

Sweetfin’s menu prices are higher on the delivery platforms, which Cohen explained is one way to incentivize customers to dine in or order directly through Sweetfin’s website, which uses ChowNow as its ordering platform and allows Cohen access to information about the customer, such as email address and order frequency.

“I think you need to merchandise the fact you offer delivery through your own website or you have the ability to order ahead through your own website or app,” said Cohen. “There are some really good ways you can tell that story in the store, whether it’s decals on the door or training your front-of-house team to let people know when they’re coming in to order, when lines are getting long … there are ways you can merchandise it.”

Cohen’s goal is to keep as many customers as possible ordering through Sweetfin because, while he appreciates the benefits of third-party delivery—particularly the wider distribution network—“ I just personally don’t believe that restaurants are gaining much incremental revenue.

“I just think the patterns in which consumers are ordering and eating have been changed,” he continued. “Some of that has to do with technology but a lot of it also has to do with the marketing spend of these third parties.”

Third-party services such as UberEats and Postmates, along with Doordash, Grubhub and others are all competing with one another for market share and in the process are incentivizing consumers, not to associate a food experience directly with a restaurant brand, but instead just look for the lowest prices.

“And really you’re almost creating a daily deal site for food on these third-party platforms where people are jumping from platform to platform, looking for the best deal,” said Cohen. “And I think when you do that, the brands that are on those platforms, the loyalty to those brands diminishes.”

Looking ahead five years, Agarwal and Sood both expect to see consolidation among the national delivery players but also growth in regional services to fill in the gaps and work more with independent restaurants versus chains and franchises. It’s Cohen’s hope that he won’t be left with just one or two services that will dictate terms.

Greater pricing transparency is needed across the industry, all agreed. As for the fate of all that customer data, don’t expect the third-party services to just hand it over. Restaurant operators will likely have to “band together to voice their needs,” said Sood.