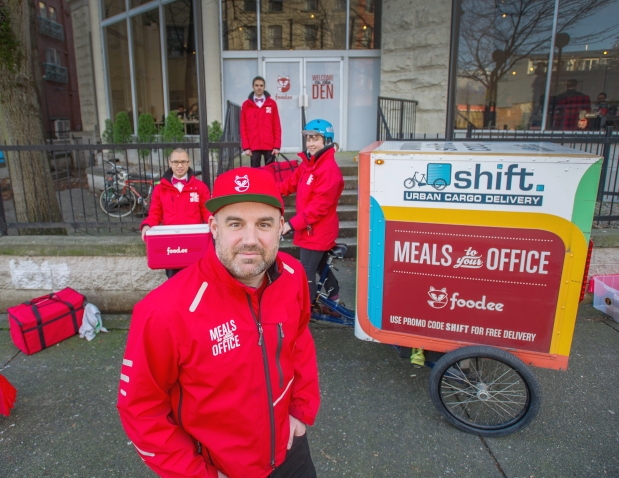 With the rise of the off-premise catering market that earned $52.3 billion in 2015—a 20 percent sales increase from 2012—restaurant operators are in a position to capitalize on the shift to order more meals from restaurants for everything from parties to office meetings.

That number from Technomic’s 2015 Catering Insights Program underscores catering as a necessary add-on service for restaurants, and just as they are angling to bring more restaurant meals to customers’ doorsteps, third-party delivery services have entered the corporate catering game as well.

A case in point is Ryan Spong, who put himself through college working as a waiter and caterer. When he decided to leave his Wall Street investment-banking job and return to Vancouver, the restaurant industry called his name.

“I think the restaurant business gets in your DNA,” said Spong. After investing and partnering in Tacofino, a concept that started with one food truck and has since grown to five restaurants and a second truck, Spong joined Foodee, which he described as a “B2B food concierge service.” He took on the CEO role in 2013, with the mindset of a restaurant owner who saw an opportunity.

Having suffered through his fair share of poor-quality lunches while parked at his desk or in meetings, Spong knew there had to be a better way than food-court fare. Foodee, he said, “supports restaurants and spices things up in the corporate world” by partnering with local chefs and owners to bring a city’s food culture into its offices.

“The corporate client is difficult to access,” said Spong. “They’re a little more high maintenance. They want what they want when they want it. The typical restaurant doesn’t get in front of this corporate consumer and they don’t want to cannibalize the regular restaurant traffic.”

Instead of flooding the kitchen with regular customer orders during busy lunch and dinner hours, Vancouver, Canada-based Foodee connects restaurants with large, off-peak catering orders—the average is $250—and handles delivery to downtown offices. The service, which is now in 11 U.S. cities, targets independent restaurants as partners and purposefully keeps a small footprint void of major chains.

“They seem to want to connect with restaurants with sustainable practices,” said Singleton. “And it’s relatively easy incremental sales for us. It’s not a huge amount yet, but it’s pretty easy for us. People are making those value connections with food more in the corporate world. They’re wanting to better integrate their overall practices and they seem to be seeking us out for those reasons.”

Foodee tailors a menu with each restaurant suited to corporate catering, Spong said its drivers—Foodee employs some part-time drivers and contracts with others—are more like waiters than delivery drivers. They go through “Foodee U” to learn restaurant-style service techniques.

“We want to approximate the restaurant atmosphere,” said Spong. Partner restaurants often see an uptick in overall revenue, as people who try their food in an office setting are more apt to visit the restaurant for an evening or weekend meal.

Foodee takes a 15 percent cut of each order’s retail price; while the corporate customer is charged a similar premium on the menu price of the food. “We offset what would normally be charged to the restaurant by charging the corporate client a little more,” explained Spong. “Corporate clients are less price sensitive. They’re more concerned about quality, timing, a professional experience.”

Foodee, which launched in 2012, has raised $10 million from Canadian and U.S. investors including Yaletown Venture Partners, Voyager Capital and Structure Capital, and has grown to 450-plus restaurant partners, with plans to expand to additional markets. Other services such as DoorDash have raised millions more and are seeing valuations of $600 million.

While not specific to Foodee, when it comes to choosing a delivery partner, be careful, cautioned Erle Dardick, founder and CEO of the Catering Institute and CateringInsights.com.

Writing for Catering Insights about third-party delivery services trying to convince investors they’re going to disrupt the delivery space, Dardick noted: “As a restaurateur, if you are approached by the plethora of third-party delivery companies that are promising you the moon and riches, buyer beware. They are simply interested in the valuations that they are going to get in the market by investors who think that they are going to get rich in the process. They are completely disconnected from the impact that their promises will have on your restaurant’s execution and reputation.”

While Dardick paints these services with a broad brush, restaurants must consider how they want their brand represented, as delivery is a crucial point of contact with the customer.

That certainly played into Singleton’s decision to go with Foodee, which she said provides regular comments from the end consumer and also asks for feedback from Birchwood.

“Our service is as much for restaurants as it is for the corporate consumer,” concluded Spong.