A Glimpse into the Future of Food at CES 2020 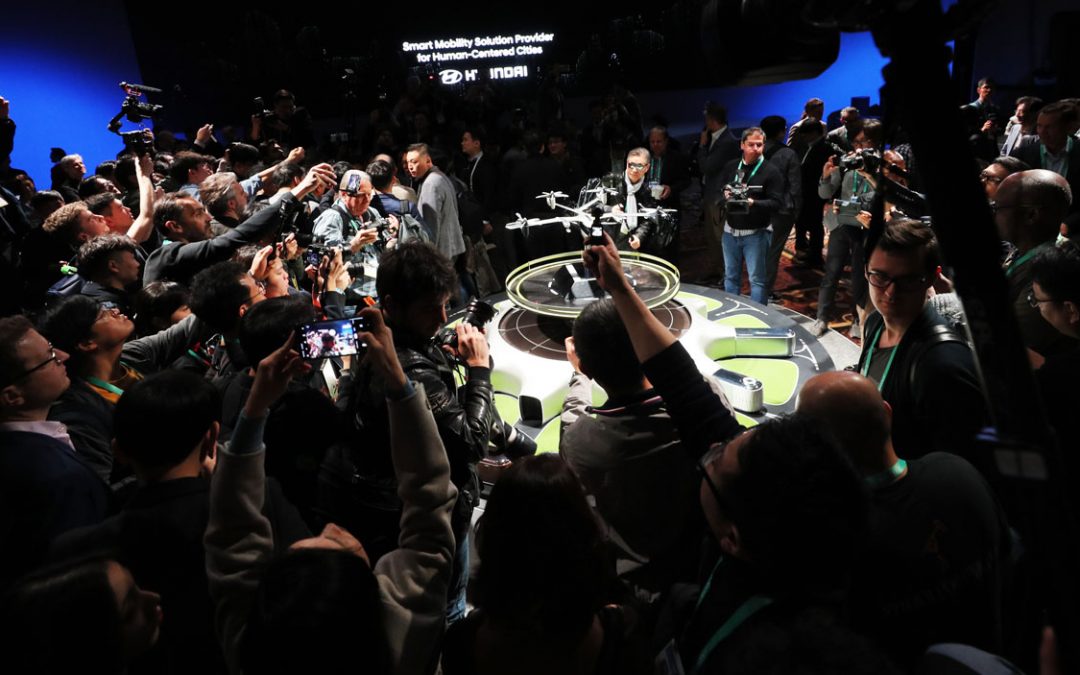 The Consumer Electronics Show (CES) is absolute nerdy chaos. Some 180,000 or more attendees are there to see hundreds or thousands of exhibitors all promising the next big thing in technology.

Ultimately, the world may never see what the breathless bloggers hail as the disruption to alter civilization as we know it, but there were still some pretty novel concepts for foodservice broadly. 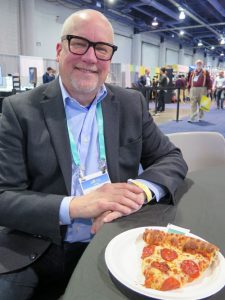 First, of course, the pizza robot! Built by the automation company Picnic, its new bot is a bit of a misnomer. It’s more of a pizza assembly bot, as CEO Clayton Wood said. Essentially, someone prepares the dough or use frozen dough in the case of event operations like CES or the Seattle baseball stadium, where Picnic has a bot making pizzas every game day. Then, the bot gets to work. Using AI vision, the first module of the system determines the size of the pizza and where to place the ingredients. The next module distributes the sauce, the next is cheese and toppings. Wood said depending on the complexity of the menu, there’s potential to have many modules strung together.

Once the pizza is assembled, an employee pops it in the oven. It’s fast enough to produce 300 12-inch pizzas per hour with the primary bottleneck being the speed of the oven. Wood said there’s potential to automate the oven hand-off too, but the device is targeted toward pizza operators and restaurants that already have ovens. So that’s on the back burner as they move toward mass production later in 2020.

Beyond ease of production, he said the device is the answer to the high-turnover, fast-moving world of pizza.

He said the company is also getting a lot of attention from the world of ghost kitchens that tend to operate with just a few people. As for the cost, that depends on how many modules and the volume of pizza going through the setup. But he said the robotics as a service (RAAS is a new acronym for you) would make sense for as few as 100 pizzas a day.

So how was the pizza? It was really good. Check out a video of the system at work below. 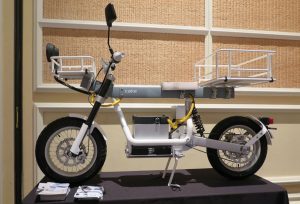 While electric bikes are still illegal in New York City, a huge percentage of delivery is done by scofflaws on their electric bicycles. While the mega city figures out a sensible way to approve the greener, faster mode of delivery, new technology is coming online.

Cake showcased a modular electric bike during CES with hundreds of potential set ups with various baskets, trailers and other components on a movable rail system. It also has modular batteries.

For a delivery driver or delivery entity, it seems like an ideal vehicle for small orders or larger catering orders via a bike trailer. Once the battery gets low, it’s an easy swap for a fresh one to get back on the road.

The bike comes out of the heritage of the extremely popular Cake electric dirt bike that a representative for the company said they “could not keep on the shelves.”

Between here and autonomous delivery vehicles, there’s a lot of potential for these sorts of last-mile vehicles, and this one just happens to look very fun to drive.

There were many, many versions of AR glasses at CES. And honestly, they all kind of sucked so we won’t be naming any names. But the concept of augmented reality glasses has incredible promise and as CES made very clear, there are a lot of companies working on the devices.

Why is it so exciting? Well, there’s all sorts of efficiency gained when folks don’t have to look down at their phones or at the screen of a point of sale. For restaurant folks, it could replace the ticket printer altogether, for drivers it could mean better, safer guidance even on an electric bike without a phone cradle. And for the consumer, it could mean another way to interact with a restaurant brand and order food.

That said, like a lot of CES gizmos, we’re pretty far from the AR future, but when something like AR glasses come to fruition, it could be transformative.

The Potential of 5G

There was a lot of talk of 5G, the fifth generation of cellular service, but like many things at CES, it’s not here yet. The first real-world uses will be surging out with much hubbub in 2021 or 2022, but that didn’t stop dozens of companies showing off their 5G-ready or 5G-hopeful devices.

Just like LTE transformed communication, 5G will certainly change the landscape. For most of the country, it’ll just mean faster and more responsive coverage via low-band (traditional cellular) and mid-band (LTE to wifi) spectrum upgrades. But the real difference will come with high-band or millimeter-wave segment of 5G. Just like 5G wifi, it’s a shorter range but much higher bandwidth and it will really shine in dense, urban areas where the most digital delivery happens.

Most ride-hailers are familiar with the spotty connections in places like New York City that place you across the street or a block down the road. It’s doing the same to delivery logistics, which means bad routes and relying on address numbers and street signs—boring.

With millimeter wave bandwidth, drivers, users and potentially autonomous vehicles can maneuver in the canyons of New York as if it were a field directly below a cellular tower and send vast quantities of data up and downstream.

Is it sexy? Not at all. But of all the bots, gizmos and doodads that get the nerds in us hyperventilating will get better with 5G.