The Miami-based company expects to open its ShiftPixy Labs facility by Labor Day of this year. It is currently working to develop a dozen virtual restaurant brands that will live within the facility with the implied goal of nurturing them to the point that other restaurants could bring those concepts into their own kitchens in the mold of other virtual restaurant providers like Nextbite and Virtual Dining Concepts.

“We decided we were going to get very aggressive in our storytelling and use the ghost kitchen as an incubator and accelerator,” said ShiftPixy CEO Scott Absher. “The more we thought about that, why are we killing ourselves here to bring value to some of these brands? Why don’t we just do it ourselves?”

By “doing it ourselves,” Absher was referring to creating virtual restaurant concepts, rather than acting as a traditional ghost kitchen that acts as a landlord for other restaurants’ traditional or delivery-only concepts like Kitchen United, The Colony or CloudKitchens. He added that, due to the company’s robust finances and access to financing, going a step further to develop scalable restaurant brands was a natural way to fully build out the fledgling ghost kitchen idea he and his team were hatching.

From that point in early 2021 on forward, ShiftPixy added a third entree to its plate, which was already crowded with helping restaurants build native delivery infrastructure, tap into shared employment resources and, now, enter the fast-changing worlds of ghost kitchens and virtual restaurants.

Asked why the company would further diversify at a time when staffing shortages have been breathlessly referred to by some in the hospitality industry as “the next pandemic,” Absher said the company isn’t taking its focus off of the labor side of the business by any stretch.

“We’re going to explode the labor side, this is explosive stuff,” he stressed.

Briefly outlining a four-part plan to build a larger national footprint in the staffing industry, Absher said its ongoing growth in labor will help provide the resources and access to capital needed to allow the company to go into each of these directions without compromising any of them.

Asked if that was too much to manage, Absher quipped, “That’s what they tell Elon Musk, too,” adding that “I’m not comparing myself to Elon Musk, but when people see this … people still haven’t quite figured out what we do. At its core, everything revolves around human capital and rethinking human capital.”

Absher said, if all of his current plans come to fruition, ShiftPixy could become one of the largest employers in the country with “probably around 750,000 to a million” employees. He clarified that would be in the mold of ADP, which manages payroll and human resources for countless companies—and counts many of its clients’ employees as its own employees.

The ShiftPixy Labs facility is designed to be modular, with each individual kitchen wrapped and branded, so that if an individual concept isn’t doing well, the company could “strip it out and replace it” quickly, including the branding. Each would be located around a central pad, which Absher described as an outdoor food court, noting that “there’s a lot of real estate possibilities.” 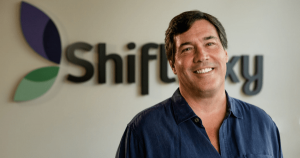 His goal is to find “remnant” space that’s currently underutilized, but could be positioned as an event or destination that would be an attractive amenity for nearby communities and built to serve a 30-minute delivery radius. Because the facility’s primary function is serving multiple delivery-focused concepts, that fulfillment infrastructure will be the highest priority during the site selection process.

Absher said another big focus of the ShiftPixy Labs business model is on “customer capture and customer re-marketing,” and he said their team will be doing something “very unique that nobody’s doing” in these realms.

Pressed if the company had cracked the code of getting virtual restaurant customers to order through native channels, Absher said, “Yes, I think we have,” and added that the solution would involve no third-party delivery involvement whatsoever.

“When people see this unpacked, it will make sense to them,” he added. “They’ll see our journey in this market space and understand how our technology stack has evolved. We’ve paid very close attention to the data, to customer moods and swings and … we’ve taken everything we’ve learned up to this point.”