By now, most of us have had an experience where something that used to be totally normal is now disconcerting—like being handed a bag of takeout from somebody not wearing a mask or being bumped into by a stranger at the grocery store. Now that any human closeness or public physical contact is best avoided, CardFree is helping restaurants implement contactless ordering and payments to keep guests and staffers safe, secure and no less than an arm’s length away.

Founded by Jon Squire, who has a deep background in the mobile payment ecosystem, CardFree was first launched back in 2012 with a foundational approach of working with huge foodservice brands like Dunkin’ and Starbucks. Now with eight years under its belt and a restaurant world that’s vastly different than it was just a few months ago, CardFree is making its service available for free “with no strings attached” as the company shifts its attention to smaller restaurants that have the same need for distance as the biggest names in the business.

With so many service providers all trying to get in the ear of restaurant operators, a big part of CardFree’s strategy is bringing as many services under its umbrella as possible—loyalty, payments, CRM, mobile apps and more— so restaurant IT teams don’t face what Squire called “vendor fatigue.” 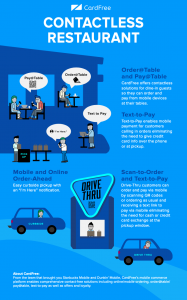 Proudly profitable for the last three years as the brand scaled up, CardFree’s team has grown to approximately 45 staffers split between its San Francisco headquarters and a secondary office in Denver. As the pandemic hit, Squire huddled up with his team to plan a major change in the business model to help restaurants at this moment of extreme, prolonged need.

“We don’t have tons of money to help, but certainly have technology that should be able to help,” he added. “We were like, OK, we gotta get busy building self-service tools so we can literally help the local pizza place down the hill, so that’s what we’ve been doing nonstop for the last three months.”

Part of that approach has included giving its services to restaurants “for the next three months or however long it takes” to bring the restaurant industry to a better place. Those primary tools have included grab-and-go functionality, along with its headline pay-at-the-table and text-to-pay functionality that allows customers to use their phones, rather than some random, germy tablet taking up space on the table.

Now in more than 9,000 individual restaurant locations, Squire said these last few months at CardFree have been more gratifying than any previous time in his career, with so much purpose

to help restaurants and gratitude from the clients grateful for an affordable solution that can help keep the doors open—virtually speaking.

As contact-free and mobile ordering solutions proliferate during the crisis, Squire said restaurant operators need to be especially careful that service providers are taking appropriate data security precautions, like being PCI compliant, to avoid future problems with fraud as their business becomes increasingly digital and facilitated by an ever-growing list of service providers.

While primarily focused on restaurants, CardFree has also seen coffee, grocery, brewery and general store operators adopting its touch-free technology, and the company expects to reach a half million transactions by the end of the year.

Describing the company’s text-to-pay function using the Mellow Mushroom pizza brand as an example, Squire said customers provide the business with their cell phone number, which is plugged into the point-of-sale system, which can then shoot out a text message with a link to the invoice so customers can pay using their preferred mobile wallet account, totally eliminating the “awkward dance” of waiting for the check and paying in an age where nobody wants to exchange germs with strangers.

For curbside, CardFree’s service uses geofencing to alert staff when a customer has arrived, and because the service is integrated into existing restaurant systems, Squire said there’s no inherent chaos that can result from multiple standalone tablets for different services and delivery providers.

“Before all this happened, it was all about the relationship. Now the relationship is a mutual understanding of how do we keep both the server and the customer safe, and that’s the most important message to get across for a lot of these guys in the near term,” Squire said. “If I don’t need to touch something additional, why would I?”