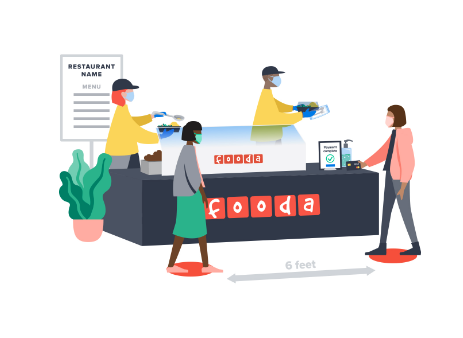 Like many workforce meal providers and caterers, Fooda reeled from the effects of the pandemic and the sudden rise of employees working from home. Now, after a significant downsizing, the Chicago-based company has found a new pool of partners in hospitals, distribution centers and military bases.

Founded in 2011, the company brings restaurant food to people at work across the country. Before COVID, its focus was on Fortune 500-level companies that wanted to bring local restaurants into their offices as a convenient perk for their employees.

Office users remain a critical piece of Fooda’s pie, but the company has found growth opportunities by focusing on a different set of workplace environments, including more than 20 large-format retail distribution centers across the country. 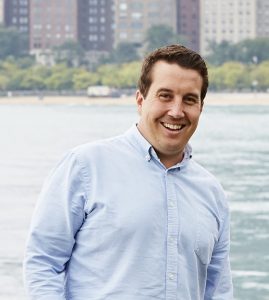 Billing itself as a late-stage startup after a comprehensive reorganization in 2021, the company is largely at peace with the decisions it made to survive such a dramatic shift in its target mark, according to President Alex Groesbeck.

He said the companywide reckoning was difficult, but that it also provided the formerly fast-growing company a unique moment to reorganize itself and shift both its technology and the focus for its sales team.

“A lot of the decisions we made early on to survive, but ultimately we’re really set up for us to come back a stronger and more profitable organization than we were pre-pandemic,” he said. “We needed to figure out how we permute our services, adapt our technology and our sales pitches to address the needs of people who are working now, so for us that was identifying new verticals—verticals we always thought we’d be in but we were more focused on geographic expansion.”

At present, the company is operating in 22 cities across the U.S., primarily large metros with large and diverse workforces. As it enters a new phase, Fooda is focused on doubling down in existing markets, but also investigating geographic expansion beyond the United States.

“We think our platform has applications internationally,” Groesbeck added. “Opening in the U.K. or Australia…we think there’s a lot of runway there, so at some point starting that process could be really interesting.”

With a model that shares elements with Foodsby and ezCater, Fooda views Aramark, Compass and Sodexo as its closest competitors. Like those institutional foodservice providers, Fooda brings nearby restaurants into existing kitchen and dining spaces within workplaces, using their brick-and-mortar locations as commissary facilities to allow final meal assembly inside employment centers.

Also like other workforce providers, Fooda allows companies to subsidize individual orders if they choose. Employers can also elect to have employees pay full price, which are the same size as orders placed inside the restaurants.

For the restaurants on its platform, Fooda provides a predictable revenue stream—every single work day in most cases—that adds up to significant annual volumes. According to the company, its average client restaurant does $190,000 to $220,000 in incremental sales over the course of a year. 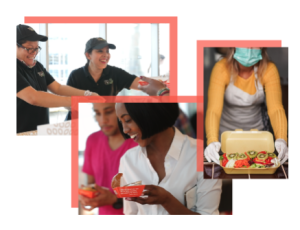 “Our clients are getting the value of different restaurants coming in every day, and restaurants are getting a similar value of being able to work with us on a daily basis,” Groesbeck added. “Generally a restaurant works with us 15 times a month or more, and they’re rotating through all of the different locations throughout the course of a month.”

Bringing their brands into workplaces provides those restaurants with valuable opportunities to introduce their offerings to new customers, which Groesbeck said is a crucial part of the appeal. Fooda’s restaurants tend to be locally owned fast-casual or casual locations. Most of its them are single-unit operators or those ranging up to a handful of locations.

Fooda typically charges its restaurant partners approximately 20 percent of sales. Whether they’re operating inside of a kitchen, cafeteria space or setting up on tables inside a kitchenette, it works with restaurants on paring down their menu, organizing an efficient setup and other finer points of presentation and operations.

Groesbeck said several of its restaurant partners credit its work through Fooda for extending their brands to new markets with a desire for additional brick-and-mortar locations. 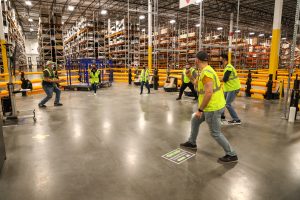 Compared to pre-pandemic days, Fooda’s window has expanded beyond primarily lunchtime occasions to more of a 24/7 spread, especially in facilities where workers are on multiple shifts during the day.

Fooda’s proprietary point-of-sale software makes it easier to accommodate workers on their own timeframes. Aside from shifting day parts, those changes also mean that lunch breaks are “more prescribed and shorter,” which means line speed and being able to order ahead and set pickup times are even more critical.

The company has also rolled out a pop-up solution that Groesbeck characterized as a “catcher’s mitt” for smaller companies that might have had 2,000 employees coming into the office years ago, but now have just 500 or 700 workers coming in on a daily basis.

“We think we’ve cracked the code on creating events that are lucrative for our restaurants, remain lucrative for Fooda and can provide a high-quality service to smaller audiences,” he said. “Historically, we needed 400-500 people in a building or an office to provide our pop-up service, but if you can get into a couple hundred now, it opens up a big category.”

Fooda compares its pop-up program to an on-site food hall or having indoor food trucks scheduled far in advance, again, with the option to subsidize meals fully, partially or not at all.

As he reflects on the last few years, Groesbeck said the challenges of the pandemic have resulted in shifts at the 11-year-old company that wouldn’t have happened without such a sea-changing global crisis.

“In a weird way, I’m glad it happened just to be able to experience the resiliency of the organization,” he added. “It’s always top of mind for me that it’s amazing we’ve gotten to where we are and that we all have bright futures.”